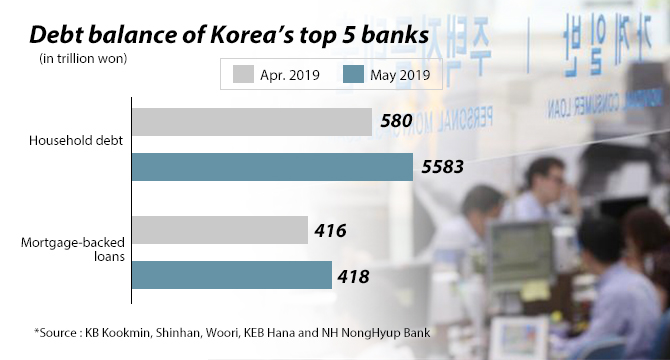 이미지 확대
Consumer debt in South Korea surged in May as the month was dotted with family day celebrations that demand extra expenditures.

The combined household debt balance of Korea’s five major lenders, including KB Kookmin, Woori, Shinhan, KEB Hana and NH Nonghyup, was 583.5 trillion won ($493.1 billion) as of late May, up 3.93 trillion won from the previous month, the biggest monthly rise this year.

Up until the first quarter, debt rose by a more moderate level of 1 to 2 trillion won on average per month due to the tightened mortgage loan restrictions. But the pace of growth quickened to 3.38 trillion won in April and accelerated further in May.

Banking experts explained that personal credit loans tend to fall in the first three months, helped by an income boost from the quarterly bonus, but that there are more occasions for heavy spending in April and May as the months are a peak moving season and include major family holidays like Children’s Day and Parents’ Day.

Home mortgages came to 418.4 trillion won in May, adding 2.66 trillion won from the previous month. The pace of growth slowed from April when they gained 3.13 trillion won. Home mortgage borrowing has been growing at a slow pace after the government introduced multiple measures including toughening screening rules for mortgage lending at banks as part of efforts to curb snowballing household debt and speculative housing demand.

By Kim Tae-sung and Kim Hyo-jin