Korea’s CPI in May up 0.7%, in zero territory for 5th straight month 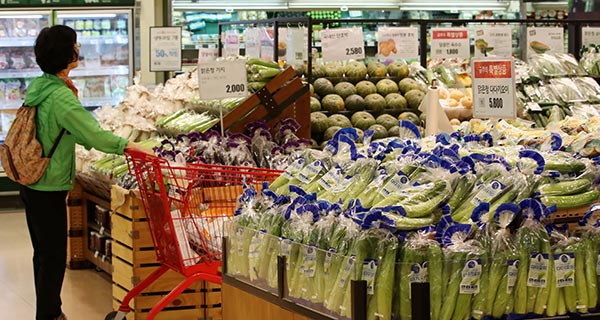 이미지 확대
South Korea’s consumer prices in May stayed below 1 percent for the fifth straight month despite higher import prices and hikes in grocery prices.

The nation’s consumer price index (CPI) in May gained 0.7 percent against the same month a year earlier to 105.05, according to data released by Statistics Korea on Tuesday.

The persistently low inflation, despite a weakening Korean won and a spike in grocery and delivery food prices, adds further pressure to the Bank of Korea to lower the policy rate. External headwinds from sprawling trade tensions are building up in the Korean economy, which contracted 0.4 percent on quarter in the first three months. While the Bank of Korea chief has reiterated that a rate cut is not on the table, the bank may not be able to put off the decision for long, given the mounting market pressures.

The flattening in the yield curve deepened, with the yields of government papers from three years to as far as 50 years all hovering below the benchmark rate of 1.75 percent. The bond market rallied to new highs on Tuesday after a U.S. Federal Reserve member officially talked of the need to lower interest rates.

Prices of agricultural, livestock and fishery products gained 1.2 percent to add 0.09 percentage point to the headline inflation. Prices of industrial prices were up 0.3 percent and service charges up 0.8 percent.

The index for everyday expenses reflecting spending for stable food and utility fees gained 0.8 percent in May compared to the same month a year ago, with food prices up 1.5 percent. The fresh food index including vegetables, fruits and fish slipped 2.1 percent.

The CPI without food and energy, the standard by the Organization for Economic Cooperation and Development (OECD), rose 0.6 percent in May from a year earlier. Core inflation, which excludes volatile agricultural product and oil prices, gained 0.8 percent on year.