이미지 확대
The South Korean economy in the first quarter performed worse than previously revealed, contracting 0.4 percent, not 0.3 percent, on quarter, according to revised gross domestic product (GDP) data from the Bank of Korea.

According to the finalized data published on Tuesday, Korea’s GDP totaled 455.08 trillion won ($385 billion) in January-March period, adding 1.7 percent on year instead of 1.8 percent previously reported.

The central bank explained that the figures were a tad lower from the preliminary numbers after full reflection of March activities.

The first-quarter performance was the worst since the fourth quarter of 2008 amidst the Wall Street-triggered financial meltdown.

The country’s exports dipped 3.2 percent from a quarter earlier in the January to March period due to the sliding demand for semiconductors and electronics equipment such as liquid crystal display (LCD). It was the weakest since the 4.5 percent contraction in the final quarter in 2017, the bank said. Imports also fell 4.2 percent on quarter as the lukewarm chip shipments led to a fall in imports of related machines and materials. 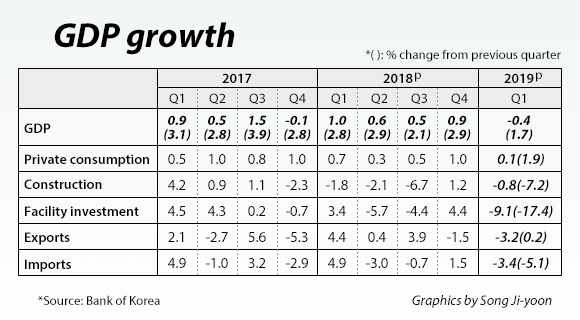 Meanwhile, the country’s per capita gross national income (GNI) slipped 0.3 percent on quarter, the weakest since the second quarter last year when it fell 0.6 percent. 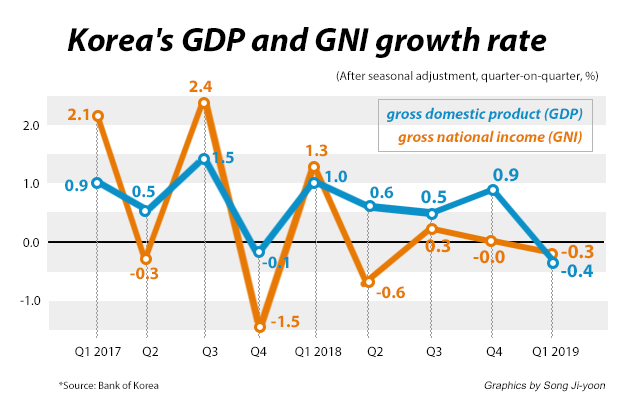 이미지 확대
GNI per capita is the total value of income earned by residents of a country in a year, divided by its population. It reflects the average standard of living in a country. The fall in the first quarter was driven by the contraction of the real GDP coupled with the plunge in net income generated from abroad, according to the data.