The Organization for Economic Cooperation and Development (OECD) became the latest to turn more pessimistic about the South Korean economy in recent months, slashing its outlook for this year’s growth to 2.4 percent from preliminary 2.6 percent in March.

In its quarterly economic outlook report published on Tuesday, the OECD revised down its gross domestic product (GDP) growth estimate for Korea for next year to 2.5 percent from previous 2.6 percent.

It joins a handful of other agencies at home and abroad that have downgraded prospects for the Korean economy for this and next year, given its reliance on demand from the world’s two largest economies amid escalating trade war between the United States and China.

Moody’s Investors Service cut its outlook for the Korean economy to 2.1 percent and Nomura Securities 1.8 percent.

The government maintains it can achieve a growth of 2.6 percent to 2.7 percent, while the Bank of Korea estimates 2.5 percent for this year as the economy performed its worst in a decade. The GDP fell 0.3 percent on quarter and added 1.8 percent on year in the first quarter.

The OECD partly attributed a decline in fixed investment and weak job creation amid ongoing restructuring in the country`s manufacturing sector to the slowdown in the country’s growth.

The country whose economy heavily depends on trade also took a direct hit from the escalating trade tensions between the U.S. and China, the two biggest trading partners to Asia’s fourth-biggest economy. The slowing growth in China, which accounts for nearly 30 percent of Korea’s outbound shipments, further weakened the country’s exports.

“The downturn in the semiconductor market, which peaked in mid-2018, also had a negative impact, as Korea accounted for more than 60% of the world’s memory market in 2018,” the report said.

According to the Korea Customs Service data, the country’s exports in the first 20 days of May were down 11.7 percent to $25.7 billion from a year ago as it was extending losing streak to the sixth month.

This grim outlook on Korea is contrary to those of other countries. The OECD raised its GDP growth outlook for the United States and the eurozone this year to 2.8 percent and 1.2 percent, respectively, and kept its forecast for China unchanged at 6.2 percent. 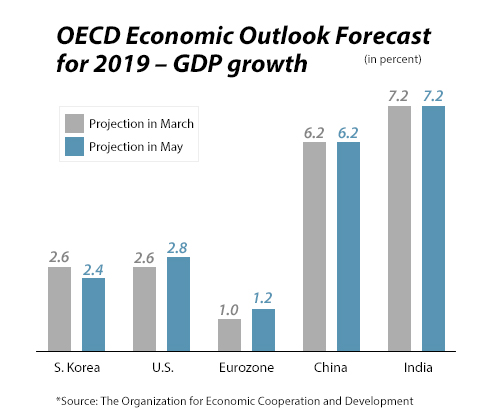 이미지 확대
The OECD advised Korea that improving labor productivity is critical to the country’s growth as its working-age population has been shrinking since 2017 and also due to the cut in maximum weekly working hours to 52 from 68. It stressed on regulatory reforms and policies to “promote greater dynamism in small and medium-sized enterprises” as they dominate the service sector whose output per worker is only about half of that in the manufacturing sector.

The group also advised, “fiscal stimulus should continue in 2020, accompanied by an easing of monetary policy, as headline inflation is well below the 2% target.” The Korean government has proposed 6.7 trillion won ($5.9 billion) supplementary budget, on top of a record-sized 2019 budget of 469.6 trillion won to prop up economy and jobs.

It said easing in monetary policy is needed as the country’s headline inflation dipped to 0.5 percent in early 2019, which is well below the 2 percent target. Market experts predict the Bank of Korea would cut policy rates later this year to prevent the country’s economy from further retreating. The policy rate currently stands at 1.75 percent, a level maintained since November 2018 when the central bank raised it by 25 basis points.

The Bank of Korea announced last month that the country’s economy contracted 0.3 percent on quarter in the first quarter, the worst in a decade.