이미지 확대
South Korea’s export prices strengthened in February for the first time in four months on strong oil prices, raising hopes for improvement in exports that have been falling for the third month in a row.

According to export and import price indices data released by the Bank of Korea on Friday, the country’s export price index gained 0.2 percent on month to 82.97 in February, snapping the fourth straight months of sliding. The index is based in Korean won and holds 2010 as the base year.

Export prices of coal and petroleum products rose 8 percent, the fastest since 8.4 percent in May 2018, driven by a jump in global oil prices. Prices of Dubai crude averaged $64.59 in February, up 9.3 percent from the previous month. Prices of Bunker-C oil gained 10.3 percent, diesel 9.3 percent, gasoline 8.9 percent, and jet fuel 7.5 percent. 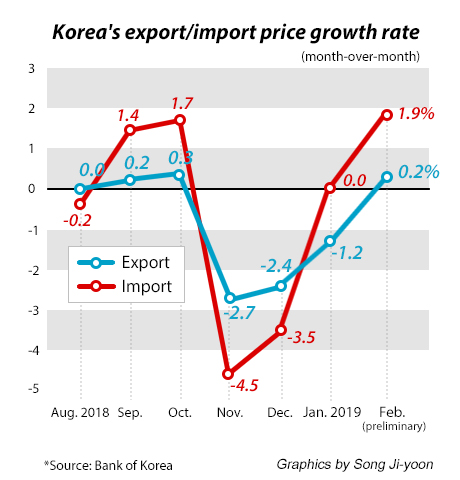 이미지 확대
Prices of the country’s mainstay export item DRAM chip extended losing streak into the seventh month in February, falling 6.9 percent on month. The last time the prices continued a downward spiral this long was between February and August 2016. The export prices of flash memory also retreated 2.4 percent. Those of liquid crystal displays for monitors and TVs slipped 1.8 percent and 1.5 percent, respectively.

But the decline in DRAM chip prices in February sharply slowed from the 14.9 percent drop in January. The central bank predicted continued recovery in export prices, given the easing in the memory export price fall.

The import price index in February stood at 86.56, up 1.9 percent on month and the fastest since May last year. Import prices of raw materials rose 5.1 percent due to higher global oil prices. Prices of intermediary goods gained 1 percent on a 7.7 percent jump in import prices of coal and petroleum products. Those of crude oil and liquefied natural gas were up 9.4 percent and 2.3 percent, respectively.

When compared against the same month last year, the country’s export prices fell 2.4 percent whereas import prices rose 3.6 percent. Export and import prices after removing the effect from foreign exchange rate were up 0.2 percent and 2 percent, respectively.