이미지 확대
South Korea added the highest number of jobs in 13 months in February primarily thanks to state-sponsored rural and construction projects that offered precarious jobs to senior age group.

According to employment data released by Statistics Korea on Wednesday, the number of employed stood at 26,346,000, up 263,000 from a year earlier. The on-year gain is the highest since January last year.

Job growth in the country significantly weakened from February last year when payroll increase more than halved to 104,000 from 334,000 in the previous month. By August, the country was able to squeeze out additions of just 3,000.

The job market started to see signs of recovery entering this year on heavy government spending that inflated jobs in the public, social welfare, farming, and construction sector with 19,000 jobs added in January. 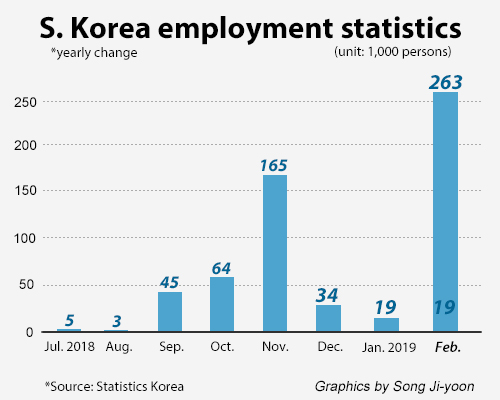 이미지 확대
The improved numbers in February were largely restricted to the senior group. The number of workers aged 60 or above grew by 397,000 from a year earlier, the highest since the statistics bureau began compiling such data in July 1982. The number of 65-year-old or older workers rose 262,000.

The health and social welfare service sector added the largest 237,000 jobs in February, followed by agriculture/forestry/fishery with 117,000 and the information/telecommunication with 72,000. The new jobs largely came from state-sponsored programs and works.

The manufacturing sector with decent-paying jobs shed 151,000 jobs and extended losing streak to the 11th straight month. The wholesale/retail sector also lost 60,000 jobs, and the finance/insurance jobs were down 38,000. 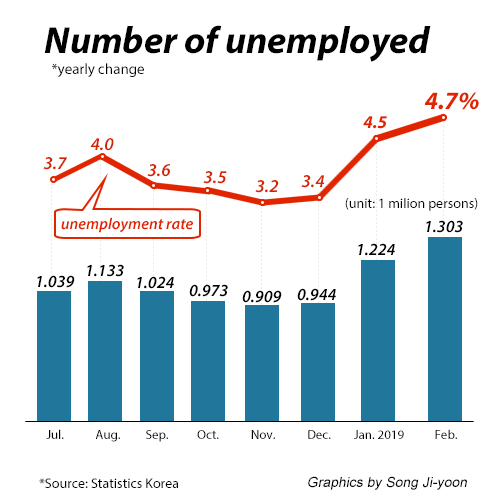 이미지 확대
The number of unemployed in February rose by 38,000 to 1,303,000 from a year earlier, the third-highest February figure since the related record keeping began in 2000.

Jobless rate edged up 0.1 percent on year to 4.7 percent.

By Kim Tae-joon and Cho Jeehyun