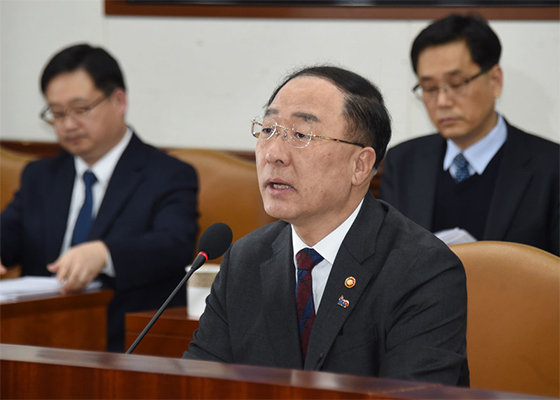 Finance Minister Hong Nam-ki speaks at a meeting in Seoul on March 4, on economic revitalization measures. [Photo provided by Ministry of Economy and Finance]

The South Korean government plans to stretch financing for the country’s exporters to 235 trillion won ($208.8 billion) as exports contract the third month in a row, raising alarm for the economy where domestic demand remains stubbornly lackluster.

“The government will strengthen trade finance across the board to stimulate exports,” said deputy prime minister and finance minister Hong Nam-ki during a meeting on Monday. He added the government must defend the exports front faced with uncertainties and challenges in trade environment due to ongoing trade conflict between the U.S. and China and faster slowdown in the global economy.

Hong said the government will allocate 100 billion won to aid promising export firms under financial struggles to receive loan guarantees after signing contracts. Exporters would be also allowed to cash their bonds promptly under a new system, which will significantly shorten the process. Currently it takes more than six months to cash their bonds.

In order to diversify export items and markets, the government will help small- and mid-sized exporters develop strategic items and projects that can garner interest from overseas consumers. “The government in March will open a new center in Toshkent in Uzbekistan to support Korean firms to win plant construction orders in Central Asia and set up an office at Korea Trade-Investment Promotion Agency (KOTRA) that helps companies enter ASEAN countries under the Moon Jae-in administration’s New Southern Policy,” Hong said.

The country’s exports fell 11.1 percent from a year ago to $39.56 billion in February, extending the losing streak for the third consecutive month. The main cause of the sluggishness was the 25 percent on-year plunge in chip shipments that had kept double-digit growth last year. Semiconductors have been the country’s mainstay export item.

By Oh Soo-hyun and Choi Mira