The Bank of Korea (BOK) estimated private consumption this year to rise a mere 1.9 percent, down from last year’s 2.8 percent and the slowest growth in six years.

Domestic demand has failed to pick up despite abundant cash supply refueled by two rate cuts. The benchmark rate is at a historic low of 1.25 percent after the central bank shifted to monetary easing in the second half.

M2, a measure of money supply that includes cash, checking deposits and easily convertible near money, rose 0.7 percent on month to 2,852 trillion won ($2.41 trillion) in September, expanding for the 12th straight month.

“Consumers are keeping their wallets shut due to the bleak economic outlook,” said Lee Seung-seok of the Korea Economic Research Institute. “Sentiment is unlikely to pick up next year.”

Household income has stayed stagnant throughout the year as social benefits and handouts accounted for most of the income for the bottom 20-percent group, adding to the skepticism about meaningful consumption growth.

The BOK, as a result, has turned cautious about recovery. It expects the country’s gross domestic product to expand 2.0 percent this year and 2.3 percent in 2020. 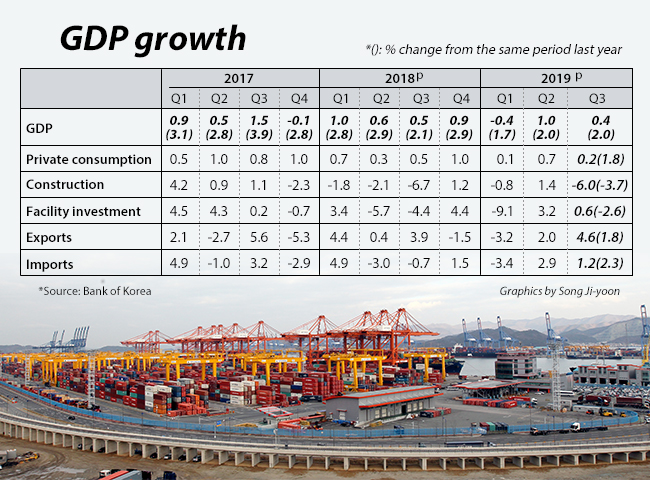 이미지 확대
Weakening demand has pushed down inflation to a level unfamiliar to Koreans who mostly witnessed high inflation during fast growth periods.

The consumer price index in November added 0.2 percent from a year earlier, gaining for the first time in four months, but mostly on one-time supply factors. Prices of kimchi ingredients like cabbage and radish jumped more than 50 percent on year due to poorer yield during the traditional pickling season.

The index without food and energy, the standard by the Organization for Economic Cooperation and Development, rose 0.5 percent on year in November, the second lowest reading since December 1999. Core inflation, which excludes volatile agricultural product and oil prices, added a mere 0.6 percent, slipping back to the 20-year low recorded in September.

Inflation in the first 11 months of the year averaged 0.4 percent, the lowest since the agency started collecting the data in 1965. Monthly price growth has been running below 1 percent since January, marking the longest stay in near-zero territory since the Asian financial crisis in 1999. In September, consumer prices dipped 0.4 percent, the country’s first experience with negative inflation.

The Ministry of Economy and Finance acknowledged that low demand is weighing down on prices.

“The current weak inflation is the result of muted inflationary pressures from both the demand and supply side as well as various policy factors that have kept agricultural and oil prices low compared with last year,” said a ministry official.

According to confirmed third-quarter GDP results on Tuesday, the GDP deflator – which measures the changes in prices of all goods and services produced in an economy – fell 1.6 percent, the biggest decline since the 2.7 percent fall in the second quarter of 1999 when the country faced an international bailout and massive layoffs following the Asian currency crisis.

Experts warn that Korea is at risk of a deflationary spiral as falling prices slows output, lowers wages, decreases demand and further drives down prices.

The GDP in the third quarter added a mere 0.4 percent from the previous three months. Growth in the second quarter came in at 1.0 percent after a surprise 0.4 percent contraction in the January-March period. The weaker-than-expected figures led the central bank last week to revise down Korea’s growth forecast to 2 percent from 2.2 percent this year, and to 2.3 percent from 2.5 percent for next year.