Construction investment was adjusted down and private consumption and total exports slightly up, according to the Bank of Korea.

Asia’s fourth-largest economy is set to perform at its weakest in a decade this year. It added 1.0 percent in the second quarter after contracting 0.4 percent in the January-March period.

GDP deflator, which measures the impact of inflation on the GDP, slipped 1.6 percent, the lowest since the second quarter of 1999 when the country was on an international bailout after the Asian liquidity crisis. It marked the fourth consecutive quarter of decline, the longest losing streak on record.

Korea’s inflation has been stuck in zero territory since January. Consumer prices finally gained 0.2 percent in November from a year earlier after they dipped below zero in September and August. 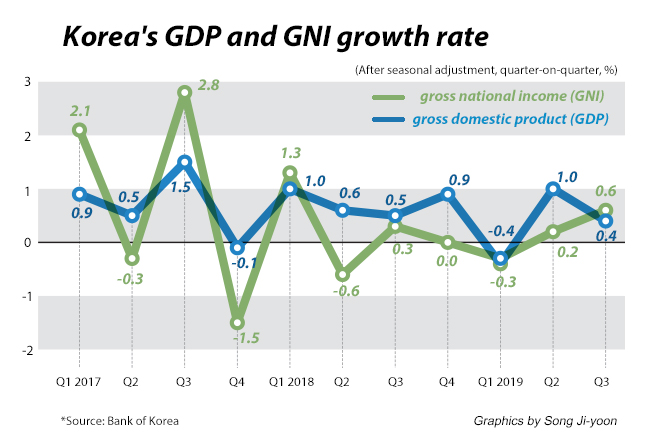 Output of the manufacturing and services sectors rose 2.4 percent and 0.6 percent, respectively, but this was offset by a 4.9 percent fall in construction activity.

Real gross national income, the sum of a country’s GDP plus net income from abroad, expanded 0.6 percent in the third quarter from the previous three months.