Rebound in exports next year won’t likely be easy 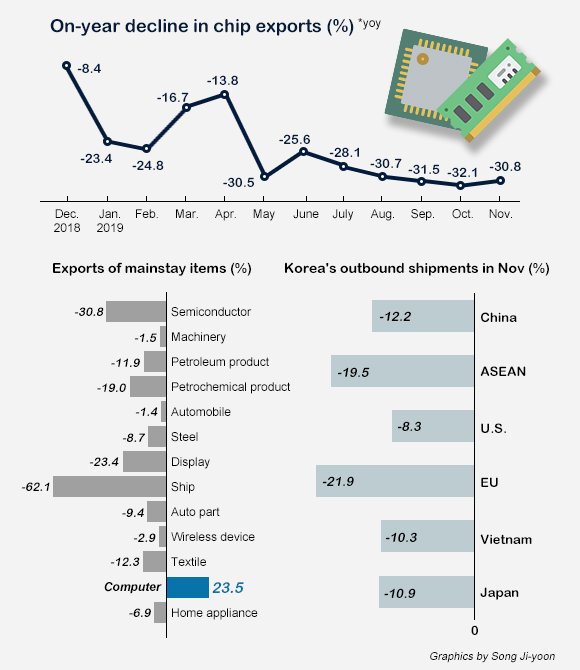 이미지 확대
Korean exports expected to deliver the worst fall in a decade this year cannot be expected of a sharp turnaround next year, given the uncertainties on the global economic environment.

The Organization for Economic Cooperation and Development (OECD) estimated the global economy to grow by 2.9 percent next year, the slowest pace since the global financial crisis a decade ago, due to a hit by the protracted trade spat between the U.S. and China and China’s sluggish economy. The organization expected the trade war of the world’s biggest two economies would cut the gain in global trade volume to 1.2 percent next year.

The global economic slowdown poses a great risk to Korea that is heavily reliant on exports for the economic growth. Korea’s outbound shipments are expected to show a feeble growth in 2020 as it would be difficult for China, its largest trading partner, to achieve its goal of more than 6 percent annual growth rate next year due to the prolonged conflicts with the U.S.

The Korea Institute for Industrial Economics & Trade predicted Korea’s exports of 12 mainstay items including semiconductors to gain 2.3 percent in 2020 from this year, and the Korea International Trade Association forecast 3.3 percent.

A recovery in exports of memory chips is expected to take longer. The global chip industry has suffered from weak demand and oversupply this year after going through a lengthy boom from the so-called supercycle where prices jumped on both tight supply and strong demand until last year.

이미지 확대
Industry experts expected a gradual recovery in global demand for dynamic random-access memory (DRAM) chips next year citing the stabilizing prices of memory chips at $2.81 in November, according to DRAM eXchange. They also cited the declining inventory levels.

“The increase in rollout of 5G-based smartphones and server demand would fuel the demand for DRAMs,” said an official from the chip industry. But the turnaround would be modest, the official added, as China has continued to increase the chip output.

The refining industry pins hopes on the new regulation by the International Maritime Organization (IMO) that limits sulphur content in marine fuels from 3.5 percent to 0.5 percent to increase sales of high value-added products. But market experts also forecast that the industry would continue to struggle due to the fall in refining margin that dropped to -$0.6 per barrel in the third week in November, turning negative for the first time since June 2001. “The lingering impacts from the U.S.-China trade row and an increase in supply from the U.S. shale oil production would continue to weigh on the exports,” according to an industry official.

The petrochemical industry that heavily relies on export market is expected to be hit hard by sluggish demand in the global market as well as the supply expansion from China. According to industry sources, China’s Sinochem Hongrun Petrochemical and Sinochem Hainan will begin operation of paraxylene factories that have a respective capacity of 600,000 tons and 1 million tons per annum this month.