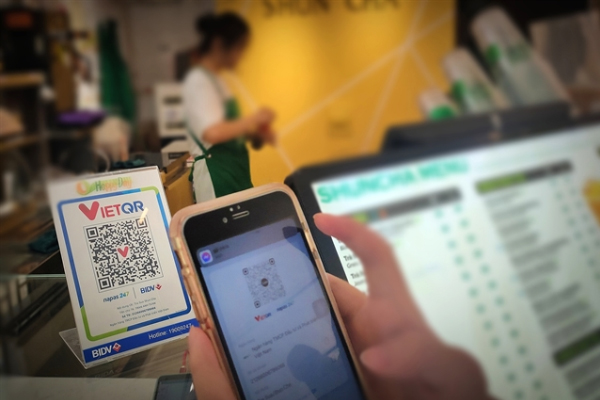 HÀ NỘI — Despite having no small cash in his pocket, Hoàng Dương can still pay for his cup of tea to a vendor in Quán Thánh street, Hà Nội, by scanning a QR code from his smartphone even though the cost is only VNĐ3,000 (US$0.13)

Hằng told Việt Nam News: “It helps me a lot in collecting small money. Sometimes, customers don’t have small money, and I also don’t have enough money to return their big cash. I often tell them to pay next time, but both of us forget about it, and I lose money as a result.”

“Now, I select from VNĐ1,000 with the code. I just print it on the coffee box, and customers just need to scan it easily. They don’t need to ask my bank account or anything.”

Meanwhile, Hoàng Dương, the payer, said: “I am so lucky, my wife helped me install an e-wallet recently. If not, I would need to go to another place to change my money. That`s so inconvenient as it is hot.”

Hằng has sold tea and juice on the small corner of the street for more than four years. Over the past two years, with the pandemic, she and others have been encouraged to embrace cashless payment solutions.

Hằng started a bank account, using Momo e-wallet and a QR code to take the smallest bills of customers.

In the past, she often had to prepare small change to return to customers, and small denominations are rare, such as VNĐ1,000 or VNĐ2,000, and are always a headache to find.

“Sometimes customers have only VNĐ500,000 paper and only buy a VNĐ3,000 cup of tea. With two of them like that at the same time, I could not deal with it. And I don’t want to tell them to go to other places for small money, but I have to,” she said.

Nguyệt said as most of her small items were paid non-cash via a bank account before, and it takes time and money to take cash from the ATM. Nguyệt now enjoys most of her cashless purchases such as meat, vegetables, bread, and milk at her local market with a QR code.

“Luckily, installing such a thing is easy and free for all shop owners, so they follow each other to have the code. They only need to paste the code at a visible area and check their phone after customers finish the payment and all is done.”

According to a professional report, by 2022, 85 per cent of consumers in the country will love and use this payment method more often than two years ago.

Tuấn said digital payment was considered strange and impossible for most small retailers at first but COVID made them change their minds. After the pandemic, people witnessed a significant increase in the demand for cashless payments, said the director.

Recently, SBV Deputy Governor Nguyễn Kim Anh, said that after more than two years, the National Comprehensive Financial Strategy to 2025 was issued, and ministries and sectors have actively implemented six tasks and solutions of the strategy.

According to the SBV, the legal framework for achieving financial inclusion goals is constantly improving. So far ministries and branches have developed and submitted to competent authorities to promulgate one law, six decrees, and five decisions and directly promulgated many circulars guiding creating an increasingly complete legal framework set for the realisation of financial inclusion goals.

To date, supply organisations and distribution channels have continued to be developed. Accordingly, the system of organisations providing financial products and services in the market has grown quite diversely in most provinces and cities across the country.