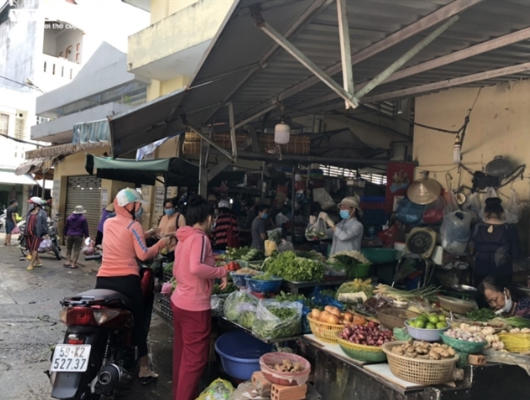 Food prices have decreased at supermarkets in HCM City, but not traditional markets. VNA/VNS Photo

HCM CITY – The sharp fall in fuel prices has caused the prices of goods such as vegetables and meats to decrease in HCM City supermarkets.

Petrol prices have fallen four times since June 21 and by a total of 22 per cent, bringing cheer to the public and businesses again by reversing a long period of rise.

The prices of a number of fresh food products, including meat, fish, seafood, vegetables, and fruits, have fallen by 10 per cent at Big C supermarket.

Some such as chicken wings and feet, frozen salmon and basa fish are another 5 per cent cheaper if customers buy three kilogrammes or more.

MM Mega Market, Emart, Aeon, Co.opmart, and Satra are offering discounts of up to 60 per cent on some items, and an average of around 10 per cent on food items.

But at traditional markets, the prices of most items have yet to decrease.

Trần Thị Hoa, a trader at Bình Thới Market in District 11, said the prices of some pork products had increased by 15 per cent and she could not understand why pork prices had not fallen though fuel prices had dropped sharply.

Economists say the low prices need to last at least half a month before an overall price adjustment occurs, so no one should expect the prices of goods and services to decline immediately.

Analysts say pork prices increased slightly at wholesale markets due to a lack of supply.

Phạm Thanh Hùng, vice chairman of Ba Huân Joint Stock Company, said the reduction in petrol prices could had brought down freight rates, but in the case of many foods such as poultry eggs and meat, they account for only a small proportion of costs.

The prices of animal feed had been increasing rapidly due to the disruptions in the global supply chain, and so it would be difficult to lower egg prices, he added. – VNS