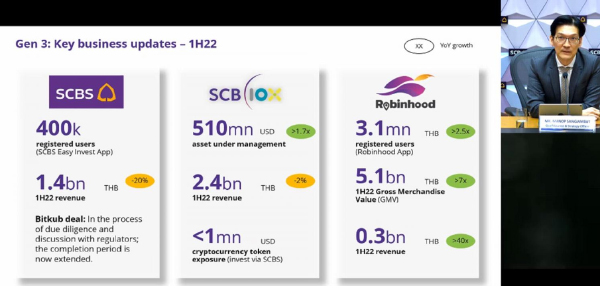 SCB chief financial officer Mr Manop talks about SCB X group"s digital asset investment during the group"s online press briefing on its financial performance during the first half of 2022.

While digital assets are still on the radar of local banks seeking long-term growth opportunities, they plan to be more cautious when investing in them amid a volatile market, say banking chiefs.

Prudent investment is a key factor for controlling risks amid high market volatility, according to the banks.

SCB 10X, a corporate venture capital (CVC) arm of SCB X Group, has invested in digital assets including cryptocurrency tokens via SCB Securities, with total exposure below US$1 million as of June this year.

The key objective in investing in digital assets is paving the way for the company to study new innovative technology in the digital era, he said.

"Despite high volatility in the market right now, it could be in the short-term, with high growth potential for the longer-term, especially for fundamental-based assets," Mr Manop added.

SCB 10X has cautiously invested in digital assets and tech startups. The company concentrates its investments on Series B and C tech startups with sustainable income, and has no policy to invest in early-stage startups, he added.

Meanwhile, SCB X Group has been transferring the assets of some businesses from SCB to SCB X. The transfers are expected to complete in the fourth quarter of this year. The transferred businesses include Card X, SCB Abacus, Monix, and Auto X, which represent combined income of around 15-20% of SCB X`s total revenue.

Mr Manop said the combined user numbers of all digital platforms under SCB X was 23 million as of June this year, up 35% year-on-year. They account for total outstanding digital loans of 48 billion baht, representing 69% growth. Digital revenue is around 4% of SCB X Group`s total income.

Previously, Sam Tanskul, managing director at Krungsri Finnovate (KFIN), a CVC under Bank of Ayudhya, said the company would pay more attention to tech startups` long-term business feasibility and revenue-making capability before making a final decision to invest in any of them.

Moreover, the company would focus on fundamental-based technologies, especially blockchain technologies. The direction is in line with the bank`s strategy to become a blockchain-based banking operation, he added.

Thanapong Na Ranong, managing director of Beacon Venture Capital, a CVC under Kasikornbank, said his company had been cautious on investments in tech startups this year due to higher uncertainties in the market.

The company will focus more on startups with a high potential to generate income over the next few years. For this year, the company is paying more attention to investments in blockchain technology and Web 3.0 technology.

Normally, around 80-90% of the company`s investment is in Series A start-ups. For startups at the lower stage, the company will invest under on a selective basis and has no policy to invest in early-stage startups.

This investment policy would continue this year. The company is scheduled to announce two or three investment deals in the next one to two months, and there are several deals in the pipeline that are expected to complete this year.

Given a slowdown in the CVC market, especially in tech startups in line with the global technology situation, the investment deals of CVCs are now based on reasonable prices and business fundamentals, compared with recent overvalued prices, Mr Thanapong said.

Beacon has also invested in related digital assets including exchange platforms and the related cryptocurrency business of five companies, such as Cryptomind Group Holdings.