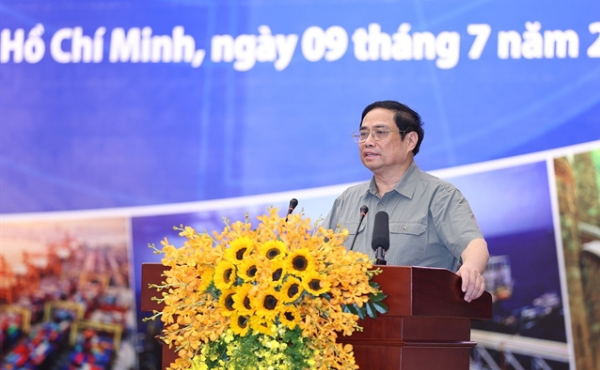 HCM CITY — Prime Minister Phạm Minh Chính stressed the need for a joint mechanism to manage the development of the southeastern region and the southern key economic region.

He was speaking while chairing a conference in HCM City on Saturday that looked into the implementation of the Politburo’s Resolution No 53-NQ/TW, dated August 29, 2005, on promoting socio-economic development and ensuring national defence and security in the southeastern region and the southern key economic region by 2010 with a vision towards 2020, along with Conclusion No 27-KL/TW, dated August 2, 2012, on continuing to materialise the resolution.

The issuance of the documents aims to maximise resources, potentials and advantages of the region to grow more quickly, stably and sustainably, PM Chính said.

The PM emphasised the important strategic location of the region in terms of economy, politics, national defence and security.

Pointing out limitations during their development, PM Chính said a new resolution is needed, with new guidelines, policies and mechanisms matching the current situation, creating new development space and impulse.

The Government leader requested continuing economic restructuring, stepping up regional connectivity, promoting science-technology and innovations, while paying more attention to socio-cultural development, improving people’s material and spiritual life, consolidating national defence and security, and focusing on the building and rectification of the Party and political system.

Over the past 15 years, ministries, agencies, Party organisations, authorities and people in the southeastern region and the southern key economic region have actively implemented tasks, solutions and targets set in the two above-said documents.

Accordingly, the gross regional domestic product (GRDP) in the southern key economic region in 2020 was 2.6 times higher than that in 2010.

During the period, the number of new enterprises in the region also expanded by 81 per cent, the highest nationwide. Especially, FDI firms in the southeastern region made up half of the national figure in 2020.