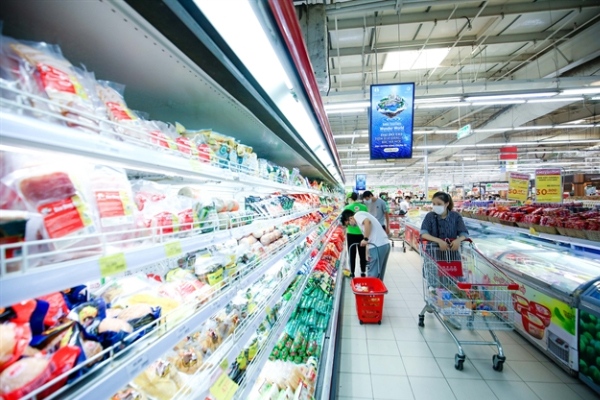 Shoppers at a supermarket in HCM City. — Photo nld.vn

HÀ NỘI — Following the passing of a VNĐ350 trillion (approximately US$15 billion) economic recovery package, the Government is considering the implementation of a cut to VAT. As part of the stimulus programme, VAT for applicable goods and services will be cut down to 8 per cent in 2022 (down two per cent from the current rate), with the reduction set to begin from February.

The move has been said to amount to a VND49.4 trillion (US$2.17 billion) tax break for businesses, nearly three times the tax cut they received throughout 2021, according to finance minister Hồ Đức Phớc.

Phớc said the Government favoured VAT reduction over income tax reduction because a VAT cut will help all businesses, not just those who reported profit.

According to the minister, a majority of firms would be eligible for the VAT cut with the exceptions of firms in the fields of telecommunications, banking and finance, property development, mining and metallurgy, refinery and petrochemicals, among others.

Products and services that were not required to pay VAT tax or at 5 per VAT tax or under special VAT tax are not affected by the cut.

According to a proposal put forward by the Ministry of Finance, firms may even include expenses incurred in their efforts to prevent the spread of the novel coronavirus in income tax forms.

Economists and firms have voiced their concern over how a 2 per cent reduction in VAT may not be able to produce the intended effect to boost consumption and business activities in 2022. Others lamented over the date on which the cut will take effect February 1, saying it`s a missed opportunity to give consumption a massive boost right before the Lunar New Year.

Addressing said concerns, minister Phớc said the Government still has to balance its budget and a tax cut greater than 2 per cent would put this year`s fiscal policy under great pressure.

While the cut this year covered more products and services, it is smaller than last year tax cut at 3 per cent VAT but only included transportation, travel and food and beverages.

Commenting on a proposal to increase tax on stock market exchanges, the minister said the Government currently has no plan to levy additional taxes.

"In 2021, the stock market`s capitalisation reached VNĐ7.7 quadrillion, equivalent to 92.5 per cent of total GDP. It has been an effective platform to secure investment for the economy," he said.

However, the Government has been considering stricter bond regulations for firms, especially those that cannot produce collateral. — VNS