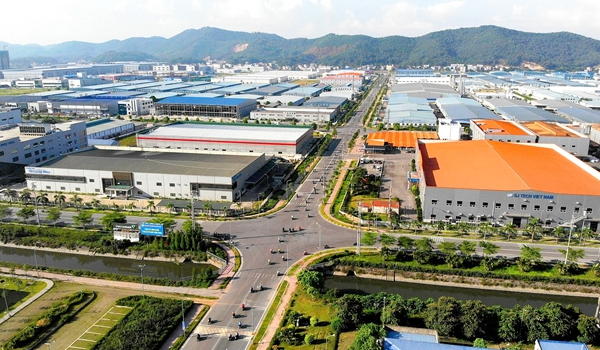 HÀ NỘI — Economic and industrial parks nationwide drew 539 foreign-invested and 615 domestic projects with a total registered capital of US$12.8 billion last year despite the COVID-19 pandemic, up 15 per cent annually, reported the Ministry of Planning and Investment (MPI).

Among 292 IPs under operation, 265 have been equipped with concentrated wastewater treatment plants capable of processing a maximum of 1.24 million cu.m each day, or 91 per cent – meeting the target assigned by the National Assembly. The occupancy rate at IPs reached 52.5 per cent while that in the operational ones was nearly 71 per cent.

At present, there are 18 coastal economic zones in 17 cities and provinces with total land and water surface area of 871,500ha.

So far, IPs and economic zones have attracted 10,331 foreign and 10,288 domestic projects worth $231.6 billion and VNĐ2.54 quadrillion ($11.04 billion), respectively. The disbursed capital reached around 69 per cent and 46.5 per cent of the total registered capital.

The department also reported that the Prime Minister approved the construction, expansion and adjustment of infrastructure in IPs with a total area of roughly 11,231ha last year. As many as 17 IPs in the northern provinces of Bắc Giang, Vĩnh Phúc, Thái Bình, Hải Dương, Hưng Yên and Thái Nguyên covering 4,151ha have been approved by the PM for additional planning.

Due to the pandemic, the total revenue of IPs and economic zones neared $182 billion last year, down 27 per cent year-on-year. They earned some $132 billion from exports, or 59 per cent of the country’s total, down 11 per cent annually, and contributed approximately VNĐ121 trillion to the State budget, down 7.5 per cent.

A number of initiatives have been launched in IPs, hi-tech and industrial clusters, such as “three on-site”, “one route – two destinations” to fill orders, seek the supply of materials and cut operating costs.