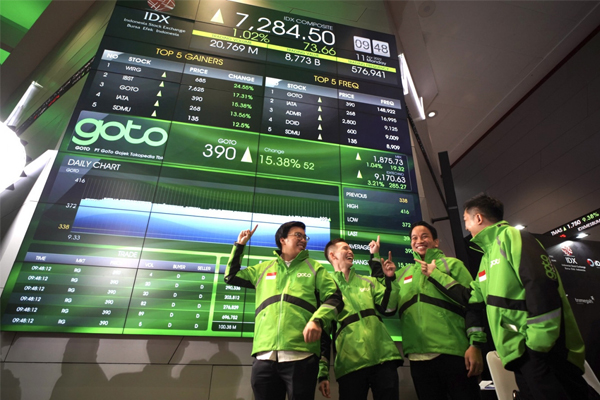 Shares of Indonesia`s largest tech firm GoTo closed 5.59 percent lower at 338 rupiah per share on Wednesday, returning to its initial public offering (IPO) price and triggering a stabilization measure on its seventh day trading. GoTo, a merger between ride-hailing firm Gojek and e-marketplace Tokopedia, had risen as much as 1.67 percent earlier on Wednesday before erasing its gain. The firm debuted at the Indonesia Stock Exchange (IDX) last week after raising US$1.1 billion in the world`s fifth-largest initial public offering this year, selling only 4 percent of its shares. GoTo had put in a place a scheme to avoid a big drop in its share price during its debut month.

PT CGS-CIMB Sekuritas Indonesia was appointed as "stabilization agent" to buy up shares from the market should the price hit the IPO level of 338 rupiah or below. GoTo reported in a stock exchange filing that the stabilization measure was triggered on Wednesday. A total 1.22 billion shares were bought at 338 rupiah, according to data by brokerage house CGS-CIMB Sekuritas, which was attached to the filing. The greenshoe option was set for a maximum 6.09 billion shares, according to GoTo`s IPO prospectus.

GoTo soared as much as 23 percent in its IDX debut on April after a keenly watched IPO, fuelling expectations of more offerings to come from the sector in Southeast Asia`s largest economy. The IPO went forward despite many IPOs across the globe being pulled due to the Russia-Ukraine war and rising interest rates. "There was no perfect timing for this IPO, but our focus was on Indonesia, with a local investor audience," said GoTo CEO Andre Soelistyo, a former private equity banker who steered Gojek`s push into consumer services. The IPO made GoTo Indonesia`s third most-valuable listed firm at $31.6 billion, along with state-owned Telkom Indonesia, and after private lender Bank Central Asia (BCA) and state-owned lender Bank Rakyat Indonesia (BRI).