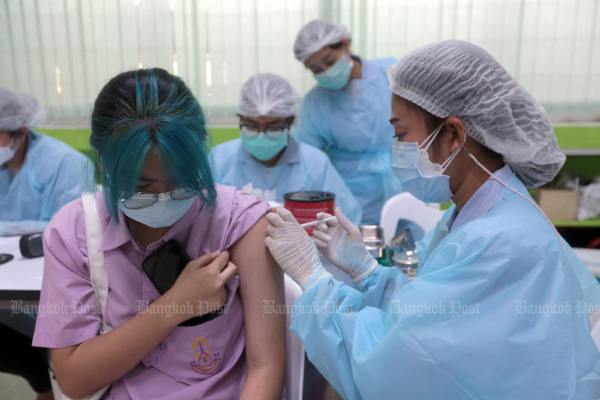 The government has condemned a claim that the Pfizer mRNA Covid-19 vaccine, being offered to students aged 12-17 as part of the plan to reopen schools in November, will have fatal consequences for all recipients within two years.

In a message spread via the Line app by several teenage groups campaigning against the Pfizer vaccination programme for young people, it was claimed the vaccine was a tool for committing genocide against young people as they would eventually die within two years if injected with the vaccine, said Dr Chawetsan Namwat, director of the Emergency Health Hazard and Disease Control Division.

This claim is believed to have fuelled fears among the parents of many students who appear reluctant to give their consent to have their children vaccinated, he said.

Dr Chawetsan insisted that the Pfizer-BioNTech Covid-19 vaccine, supplied by the US-based Pfizer Inc and Germany-based BioNTech SE, has been proven to meet the safety standards in vaccine development and production and was being used widely in these two countries.

In Thailand the first batch of 1.8 million doses of the vaccine has already been distributed to the provinces for the about 3.6 million young people who have signed up to be vaccinated, he said. About 1.5 million more doses will follow next week while more supplies of the same vaccine will come later, he said.

According to the Centre for Covid-19 Situation Administration (CCSA), so far just over 150,000 students have received their first jab.

So far three cases of heart muscle inflammation, a rare severe side effect of the mRNA vaccine, have been found among these recipients and all of them have recovered after prompt treatment, said Dr Sopon Iamsirithaworn, deputy director-general of the Department of Disease Control.

Dr Chawetsan said the vaccination of school students isn`t the main criterion for allowing schools to resume onsite learning, their compliance with Covid-19 control regulations is.

The regulation require nearly all school staff to be fully vaccinated, students being prohibited from gathering in large groups, sports competitions being banned, everyone being requiring to wear a mask and maintain social distancing while in schools, he said.