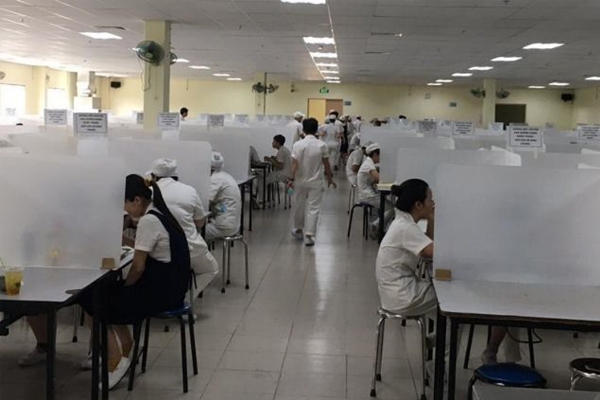 HCM CITY — Companies in HCM City and other industrial hubs like the neighbouring provinces of Bình Dương and Đồng Nai are struggling with a labour shortage after the pandemic.

The city and provinces have reopened the economy after months of shutting down, but only those with ‘green cards’ are permitted to work, which is the root of the problem, they said.

Besides, more than 90 per cent of workers are migrants and tens of thousands are returning to their hometowns daily after travel restrictions were lifted, they added.

Đặng Tuấn Tú, union president of Đồng Nai-based Changshin Vietnam Co., Ltd., said only 2,000 workers, or just 5 per cent of the labour force, were expected to return to work on October 5.

Most companies in Đồng Nai Province had only vaccinated 40-50 per cent of their employees, he added.

Nguyễn Thị Thùy Vân, union president of Long Rich Co., Ltd. in HCM City, said only 125 of the firm’s 4,000 workers were expected to return to work this week.

The main challenges were due to travelling bans between provinces and the requirement for green cards for vaccinated workers, she said.

Around 4,000 workers got vaccinated in June, but only 900, who remained in HCM City, got the second shot, she added.

People who had returned to their hometowns had not got the second since travelling over provinces and city was still prohibited, she noted.

Mai Hữu Tín, chairman of the Bình Dương Business Federation, said, “Factories in the province are set to face a shortage of 50 per cent of workers.”

But one good news was that the need for workers to test negative for COVID or stay in factories had been removed, he said.

Bình Dương authorities allowed employees who had got at least one shot at least 14 days earlier or had recovered after contracting the disease in the previous six months to work in factories, he said.

Besides, if a new patient was found, factories only needed to shut down the particular area and not completely unlike earlier.

Võ Văn Minh, chairman of the Bình Dương People’s Committee, encouraged workers to stay in the province and be vaccinated and return to work when factories reopen.

Most people aged over 18 had got at least one dose, and priority for the second would be given to factory workers, he said.

The Đồng Nai Industrial Parks management said it had allowed 11 businesses to allow their 17,500 employees to go home every day and stop having them live on-site if they live in ‘green’ zones, or safe areas, and have got at least one shot of a vaccine.

According to the Bình Dương Department of Labour, Invalids and Social Affairs, the province has spent VNĐ2 trillion (US$88.21 million) to support workers facing difficulties caused by the pandemic.

It said the province would work with other provinces to welcome workers back since a number of factories had reopened and had huge labour demand.

The online Đồng Nai Employment Exchange said 28 companies had registered to hire more than 4,500 workers as of October 3, but only 150 jobseekers had applied.

An industrial park developer in Bình Dương said in addition to the Government’s support policies there should also be incentives from businesses to attract workers back. They could pay an extra month’s salary, it said.

On October 3 the government issued a directive urging businesses to work with local authorities for reopening the economy by ensuring smooth production, goods circulation, travel and accommodation of workers, and compliance with pandemic safety requirements.

Provinces and cities needed to set up a steering committee to restore production, speeding up vaccination of employees and allowing a number of essential services to resume, it said.

It also urged the Ministry of Health to issue specific regulations for the distribution of vaccines to provinces, social distancing measures and testing, and ensuring workers’ safety by businesses. — VNS