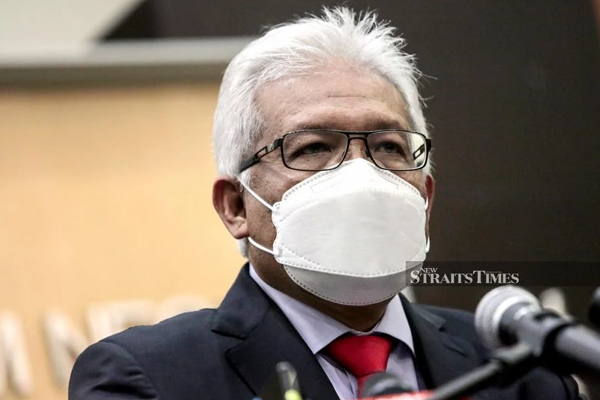 Home Minister Datuk Seri Hamzah Zainuddin says the government through the Cabinet Committee to Combat Drugs and other ministries are looking into whether cannabis can be used medically. - NSTP file pic

KUALA LUMPUR: The government will continue to study ways and review laws in legalising use of cannabis for medical purposes in Malaysia.

Home Minister Datuk Seri Hamzah Zainuddin said the government through the Cabinet Committee to Combat Drugs and other ministries are looking into whether cannabis can be used medically.

"There has been a special platform namely, the Cabinet Committee to Combat Drugs, to discuss and report issues related to drugs since 2004.

"Any matters relating to drug control and enforcement, including cannabis, which is listed as a dangerous drug under the Dangerous Drugs Act 1952, will be discussed in the committee," he told the Dewan Rakyat in his ministry`s winding-up speech today.

Hamzah was replying to a question from Syed Saddiq Syed Abdul Rahman (Independent-Muar) on the government`s review involving cannabis for medical purposes.

In 2019, then Deputy Health Minister Dr Lee Boon Chye said marijuana will only be considered for medical use when there is firm evidence to show its efficacy and that it is safe for use.

Earlier, International Trade and Industry Minister Datuk Seri Mohamed Azmin Ali said the government should look at the needs of the medical marijuana industry from a larger perspective and review the matter.

Replying to a query from Syed Saddiq on whether the ministry could consider approving the use of hemp or medical marijuana for export, Azmin said although it had been discussed in the Pakatan Harapan administration, the matter needed to be reviewed, adding that any such policy change would involve several amendments to the Dangerous Drugs Act and feedback from the Health Ministry.

"This matter has been discussed, presented to the cabinet and several views have been submitted. We have also engaged with several parties, including academicians and private parties, for us to see the potential of this industry.

"We have to look at it from a larger perspective on the needs of this industry to be developed. However, it must follow the letter of the existing law," Azmin said in his winding-up speech for his ministry.

On Sept 29, Syed Saddiq had proposed in the Dewan Rakyat, that the government establish a committee to study the possibility of allowing the hemp industry and medical marijuana in Malaysia.

He had said approval for hemp and medical marijuana had been given in over 40 countries, including Australia, the United States, Canada, Argentina and Denmark, with the latest being Thailand.

He had added that the industry was worth around RM60 billion and is expected to reach RM400 billion in four years.