Vietnamese billionaires’ net worth increases after battling headwinds of 2020 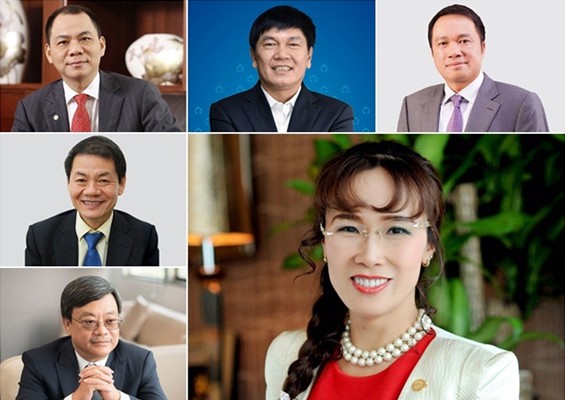 Six richest people in Việt Nam as of January 6.

HÀ NỘI — 2020 was a difficult year for the global economy including Việt Nam, but some Vietnamese billionaires still saw their net asset value increase.

According to Forbes, besides five familiar faces which were included on its World Billionaires list in 2019, there is the return of one businessman – Trần Đình Long. The recovery of Việt Nam’s stock market at the end of 2020 after tumbling in March contributed to the positive result.

As of January 6, Phạm Nhật Vượng, chairman of Vingroup (VIC), is still the richest man in Việt Nam, with a net worth of US$7 billion, an increase of US$139 million compared to the day before. VIC shares traded at VND110,000, up 0.27 per cent in the morning trading session.

The CEO of budget carrier Vietjet Air (VJC), Nguyễn Thị Phương Thảo, remains the second richest person in Việt Nam with total assets of US$2.5 billion, down US$33 million from the day before. The airline industry has been hit hard due to COVID-19 with all commercial international flights halted. The price of VJC shares was at VND123,900 in the morning session on Wednesday, down 0.72 per cent. 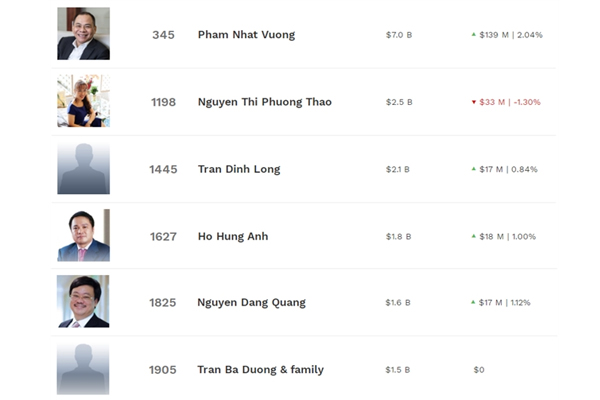 
List of richest people in Việt Nam as of January 6 by Forbes.

Trần Đình Long, chairman of the board of Hòa Phát Group, has returned to the race, ranking 1,455th in the magazine’s list and becoming the third richest man in Việt Nam. As of January 6, his assets value increased US$17 million to US$2.1 billion.

Hòa Phát produced near 5.2 million tonnes of steel in the first eleven months of 2020 and sold more than 3 million tonnes of construction steel to the market, up 23.7 percent year-on-year, according to Hòa Phát’s website.

Hồ Hùng Anh, chairman of Techcombank, is 1,628th in the current ranking with total assets of US$1.8 billion, increasing US$18 million.

Thanks to the recovery of the stock market, Masan’s share prices increased sharply in the last months of 2020 which helped founder Nguyễn Đăng Quang’s net worth rise US$33 million to US$1.5 billion.

After a deal to acquire retail system VinCommerce at the end of 2019, the price of Masan shares fell dramatically and hit a bottom last April. But it recovered and in the last trading day of 2020, the company’s shares price was up more than 50 per cent compared to the beginning of the year to VND85,500.

Meanwhile, Trần Bá Dương, chairman of the Trường Hải Auto Corporation (THACO), and his family saw the value of his assets unchanged at US$1.5 billion as of January 5. He and his family rank at 1,905th in the world’s richest person list.

However, not all business people could weather the chaotic year.

Trịnh Văn Quyết, president of FLC Group (FLC) and Bamboo Airways, saw his assets drop under US$1 billion at the end of 2020. He was the richest person in Việt Nam in 2017 and has been listed in the top three richest people in Việt Nam a number of times.

He withdrew as board chairman of FLC Faros Construction in April, when the market was hit hard by COVID-19. FLC shares traded at VND4,470 on Wednesday morning, down 0.45 per cent. — VNS