Emerging markets seen rising in 2022, but not until July 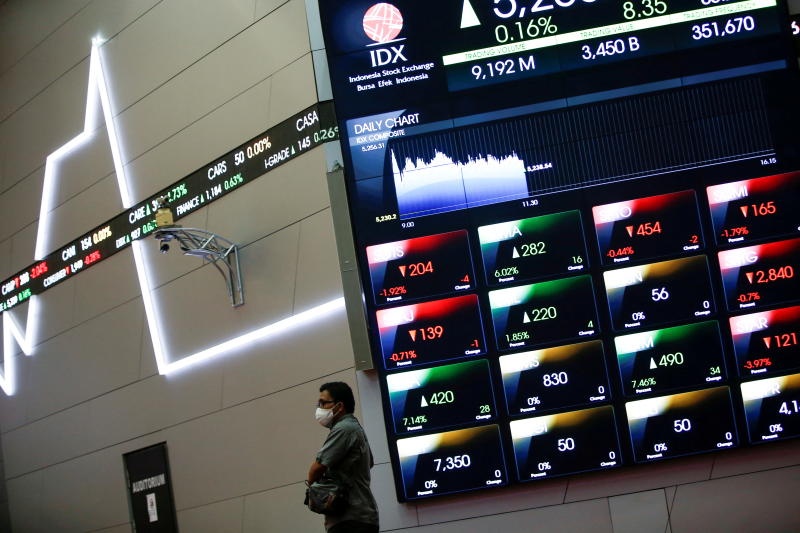 FILE PHOTO: A man wearing a protective mask walks near an electronic board displaying the stock market index at the Indonesia Stock Exchange (IDX), in Jakarta, Indonesia, Sept 8, 2020. (Reuters)

Emerging-market assets are set to rise in 2022 as moderating inflation and accelerating growth trigger gains, but that won’t happen until the second half of the year.

That’s the consensus among investors like Goldman Sachs Group Inc, Morgan Stanley and JPMorgan Chase & Co who spoke with Bloomberg on the outlook for developing-nation stocks, bonds and currencies in the new year. As for specifics, they are looking for a Chinese equity rally and gains in local-currency bonds in countries such as Poland, Czech Republic and Hungary.

A mid-year recovery would mark a turnaround for a sector that’s about to wrap up its worst year since 2018. While this year’s narrative has been dominated by rising consumer prices, disparate Covid-19 vaccine rollouts and gains in the US dollar driven by expectations of Federal Reserve tightening, better variables may come into play later in the year. Investors already see signs of recovery as policy makers get tough on inflation by boosting rates, while a peak in US growth may hand the advantage back to developing economies, they say.

“2021 has been a year when developed markets outperformed emerging markets in economic growth, and this needs to reverse,” said Tai Hui, chief Asia market strategist at JPMorgan Asset Management in Hong Kong.

Rising vaccination rates in some economies will offer a more favourable backdrop, just as signs emerge that supply-chain issues may be stabilizing, Hui says. Additionally, US policy rates could remain lower than headline inflation, intensifying the search for income.

That would be a welcome change in fortunes for investors in countries whose economies account for more than half of the world’s gross domestic product. The MSCI gauge of emerging-market stocks has dropped more than 5% this year, trading near the lowest level since 2001 relative to US stocks. Local-currency debt is on course for the worst year since 2015, while dollar bonds are heading for only their third loss since the global financial crisis of 2008.

Those disappointments underscore how growth rates among emerging nations have failed to keep pace with their richer counterparts. While developing economies were expanding an average of 2.5 percentage points faster than their developed peers before the pandemic, that’s narrowed to 1.3 percentage points this year, partly due to a shortfall of stimulus to counter the pandemic, investors say.

But with the Fed making a hawkish pivot and signalling three rate increases in 2022, US growth may peak. And that, coupled with a revival in economic activity in emerging markets, might help to widen the differential again.

At least 23 emerging and frontier nations have raised rates this year, which could have a moderating impact on inflation and boost real returns from emerging-market assets, especially stocks and local-currency bonds. At the same time, rising shipments from Asia suggest supply-chain bottlenecks may be easing, which also eases pressure on prices.

Another factor likely to work in favour of emerging markets is China’s policy-easing stance. Authorities in the country, which typically accounts for a third of all major developing-economy indexes by weight, are stepping up support for an economy under strain from a property market crackdown. In the latest move this month, Chinese banks lowered borrowing costs for the first time in 20 months.

Following are some of the biggest calls by emerging-market investors for 2022.

“We expect that inflation should probably start to come down next year for both emerging markets and developed markets as base effects start to kick in. Supply-chain constraints should start to ease as well.”

“We expect the dollar to be somewhat range-bound. It is hard to see a lot of dollar weakness as there are offsetting forces.”

-“If the Fed embarks on a very aggressive tightening cycle or if China decides to keep its real estate policies extremely tight, emerging-market assets would suffer further. None of these two scenarios are central scenarios.”

“Our economists forecast the EM versus DM growth differential to trough in the second quarter of 2022 and begin to recover in the second half. Emerging-market assets typically outperform along with an acceleration in relative economic momentum. US growth cooling in line with trend growth is also a positive. EM assets tend to struggle when the US is running too hot.”

Policy relaxation in China will be quite critical more so for sentiment than actual fundamentals. China may not relax massively but it’s the signal it will send which will comfort.

“Vaccine rollout has been too slow in the majority of emerging markets. However, the good news is that some degree of herd immunity appears to have been achieved, with India, Indonesia, the Philippines and beyond all seeing controlled epidemic situations. At long last, 2022 could be the year when these emerging markets get the reopening boom that most developed markets have experienced this year.”

“Were the Fed to accelerate its taper, leading faster and larger rate hikes as early as mid-2022, financial conditions would tighten and pose heightened risks to emerging-market debt from both an inflow perspective and due to slower growth implications more broadly.”