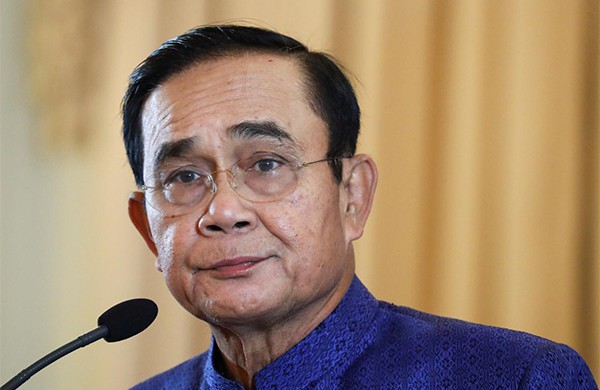 Prayut: "The country will suffer"

Prime Minister Prayut Chan-o-cha on Tuesday warned that the country will lose an opportunity to move forward if the anti-government protests persist.

Speaking after Tuesday`s cabinet meeting, Gen Prayut said that the protest leaders have already made known their real intentions, and that the public must decide for themselves.

The Saturday rally at Sanam Luang was led by the United Front of Thammasat and Demonstration (UFTD), with its 10-point manifesto, including demands for reform of the monarchy.

"We need to learn more and have rationale for action so it will not affect the public as a whole. Otherwise, the country and the people will lose opportunities. No one wins or loses. But it is the country that will suffer. That`s what I`m more concerned about," the prime minister said.

Commenting on the student activists` plan to gather again outside parliament tomorrow, Gen Prayut said that it should be left to relevant authorities to enforce the law to deal with the protesters, adding that the government is not in conflict with anyone.

The Metropolitan Police Bureau (MPB) is preparing multiple charges against the 16 leaders of the anti-government demonstration last weekend.

Pol Maj Gen Sukhun Prommayon, a deputy MBP commissioner, said on Tuesday that charges would be brought against 16 key protesters, who were in three groups: Those who organised the demonstration without getting authorisation; those who invited others to take part in the rally through all channels and those who spoke from the demonstration stage.

Police were transcribing their speeches, parts of which were improper, he said.

Bangkok police were also taking legal action against the demonstrators who installed a pro-democracy plaque in the ground at Sanam Luang on Sunday.

This would include a complaint filed by the Fine Arts Department under the Ancient Monuments, Antiques and National Museums Act, which prohibits any change to a heritage area, Pol Maj Gen Sukhun said. Sanam Luang is included in the ancient monuments and museums law.

The plaque was dug up and removed on Sunday night. No one has admitted to seeing who did it.

It was agreed that each side would get seven hours and 20 minutes in total for the debate on draft charter amendments, which would run from today until no later than midnight of tomorrow, when a voice vote would be taken on each motion.

For a motion to pass, a majority of the 750 members of both houses is needed. That majority must include one-third of the 250 senators (84) and 20% of opposition MPs.

After the vote, a 45- member committee will be set up to scrutinise the bills. The composition is senators (15), Palang Prachararth Party (8), Pheu Thai (8), Bhumjaithai (4), Move Forward (3), Democrat Party (3), Chartthai Pattana (1), Prachachat (1), Seri Ruam Thai (1), New Economics (1). They may include outsiders based on the quota. Chief opposition whip Sutin Klungsang said the debate would start at 9.30am on both days. Today`s session would end at 1.30am, and tomorrow`s by 6pm.

Virat Rattanaset, chairman of the coalition whips, said the six bills would be debated at the same time. All three sides have yet to discuss their stances on each bill. Of the six bills, one is from Pheu Thai, another from coalition parties and four from opposition parties.

Internet Law Reform Dialogue (iLaw), a non-profit organisation, on Tuesday submitted to Mr Chuan what it calls the people`s constitution amendment bill backed by more than 100,000 who signed up to support it.

Carrying five carts filled with forms signed by 100,732 people, members of iLaw and its allies took a one-hour walk from the MRT Tao Pun station to parliament on Kiak Kai Road to deliver its bill. Mr Chuan said it was too late for the bill to be put on the meeting agenda.