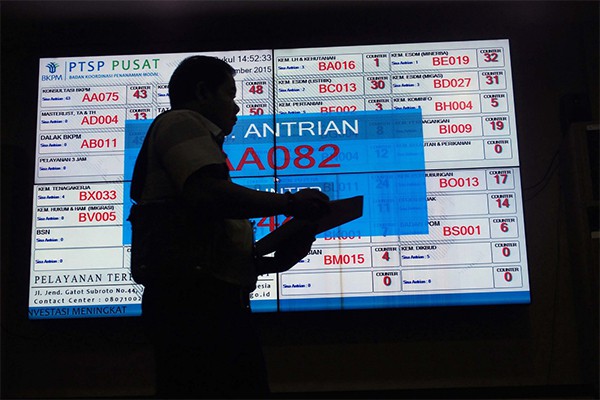 A man walks past an electronic information board at the Investment Coordinating Board"s (BKPM) One-Stop Integrated Service in Jakarta on Dec. 1, 2015. (JP/Ricky Yudhistira)

Indonesia recorded a further decline in foreign direct investment (FDI) realization in the second quarter this year, as the COVID-19 pandemic batters both the national and global economy.

The Investment Coordinating Board (BKPM) announced on Wednesday that FDI fell 6.9 percent year-on-year (yoy) to Rp 97.6 trillion (US$6.67 billion) in the April-June period, continuing the downward trend recorded in the first three months of the year. In the first quarter, FDI dropped 9.2 percent yoy.

“The second quarter was a very difficult period,” BKPM head Bahlil Lahadalia said in a virtual presser on Wednesday. “We had not anticipated this; our aim was to attract Rp 200 trillion in the second quarter.”

Even before the pandemic, the government had been struggling to attract foreign investment and help investors realize their projects by cutting red tape and providing various incentives in a bid to support economic growth.

FDI contributes to more than 30 percent of Indonesia’s gross domestic product (GDP), making it the second-largest contributor after household spending. However, the pandemic has hit investment in the country as growth plunged to 1.7 percent yoy in the first quarter from 5.03 percent in the first three months of 2019, Statistics Indonesia (BPS) data shows.

Indonesia’s economy grew by 2.97 percent in the first quarter, the slowest in 19 years. The government expects the economy to shrink by up to 5.08 percent in the second quarter as the outbreak paralyzes business activity.

The BKPM reported that domestic direct investment (DDI) was also down, declining by 1.4 percent to Rp 94.3 trillion in the April-June period from the same three months last year. Overall, total investment in the second quarter dropped 4.3 percent yoy to Rp 191.9 trillion, putting the half-year figure at Rp 402.6 trillion.

Of the total investment in the second quarter, 15.8 percent went into the electricity, gas and water sectors; 14.1 percent in transportation, warehouse and communications; 10.8 percent in metal and non-machine business; and 9.4 percent in the food and beverages sector.

Singapore continued to be the largest source of FDI, investing $4.7 billion in the first half of the year.

Despite the southward trend, Bahlil said he would not revise down this year’s investment realization target of Rp 817.2 trillion, which is lower than the prepandemic target of Rp 886.1 trillion.

“There have been no more revisions up to this point — unless the coronavirus cases continue to rise,” said Bahlil.

He conceded, however, that the current health crisis would make it difficult for the country to achieve its goal.

Indonesia has seen a steady increase in COVID-19 infections since March, recording more than 1,000 new cases per day since June. As of Wednesday afternoon, as the government works to gradually open the economy, the country has reported 91,700 cases with at least 50,200 deaths, according to official data.

The government has been stepping up efforts to attract new investment both from local and foreign companies by developing a 4,000-hectare industrial park in Batang Regency, Central Java.

In late June, President Joko “Jokowi” Widodo said seven foreign companies had expressed their interest in relocated their facilities from China to Indonesia. This was considered a sign of progress as Indonesia failed to attract firms moving from China last year.

One of the seven has already started construction work in Subang regency, West Java, while 119 companies with a total investment of $41.4 billion are expected to follow, according to the BKPM.

“The government may be aiming too high as the pandemic has not shown signs of slowing down and international organizations are expecting a deeper slump in Indonesia’s economy,” Institute for Development of Economics and Finance (Indef) economist Bhima Yudhistira told The Jakarta Post.

“This is not just about investment figures but also about the multiplier effect on job creation.”

According to the BKPM, realized investment created 263,109 jobs in the April-June period, up by 3 percent from the same period last year.

Center of Reform on Economics (CORE) Indonesia executive direct Mohammad Faisal said on Wednesday there was a growing appetite for investment in manufacturing, particularly metal-making, and food and beverage companies.

Although investment in the manufacturing sector does not immediately translate to building plants, factories might be prone to disruption if a COVID-19 cluster broke out on-site.

“We still have much to do to attract more investment to the manufacturing sector and we must address [any issues] as soon as possible if we want to compete against other countries,” Faisal said.