Ministry conducts early bidding for 1,900 of next year`s construction projects 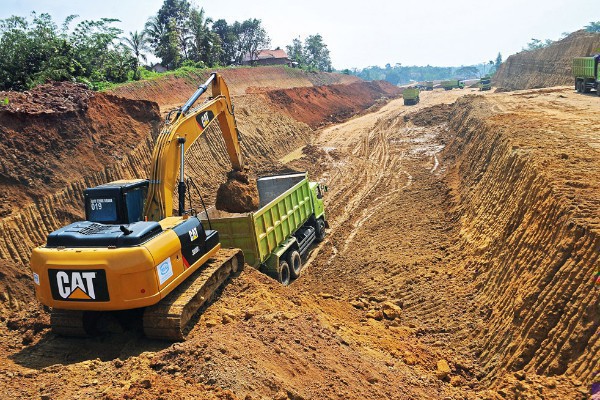 An excavator loads a dump truck at the construction site of the Serang-Panimbang toll road in Pasarkeong, Lebak regency, Banten, in this undated file photo. (Antara/Muhammad Bagus Khoirunas)

The Public Works and Housing Ministry is conducting an early bidding process for thousands of projects for next year, as it strives to ramp up state spending to support economic recovery and boost the construction industry, which has been affected by the health crisis.

Public Works and Housing Ministry Construction Director General Trisasongko Widianto said on Tuesday that the ministry was already processing 1,900 infrastructure procurement packages out of 4,900 planned packages for 2021 through the electronic procurement system (SPSE).

Trisasongko said the government had set a target of wrapping up the bidding process for 30 percent of the total projects by as early as January next year.

“Hopefully, we can sign contracts for 30 percent of those packages,” he said during the opening ceremony of Indonesia Infrastructure Week.

During the event, Minister Basuki Hadimuljono said that government expenditure remained the bedrock of Indonesia’s economic recovery during the fourth quarter of 2020 and in 2021, as investment and consumer spending continued to be under pressure.

“The government spending hike during the third quarter has helped cushion our economic contraction to only around 3 percent. We have to keep increasing our expenditure to support economic growth in the fourth quarter and in 2021,” Basuki said.

Indonesia plunged into recession for the first time in two decades as the economy shrank 3.49 percent in the third quarter, after contracting by 5.32 percent annually in the second quarter, as the COVID-19 pandemic continued to ravage the economy. Household spending, which contributes more than half of GDP, also fell by 4.04 percent in the third quarter.

The government expects the economy to contract by 0.6 to 1.7 percent this year. The ministry had spent merely 68 percent of its Rp 87.76 trillion (US$6.2 billion) allocation in the 2020 state budget as of Nov. 1 this year, according to a press statement.

Finance Minister Sri Mulyani Indrawati said on Nov. 12 that the government was also looking to spend around Rp 1.2 quadrillion in state budget and regional administration funds in the fourth quarter this year to support the economic recovery. Basuki said the government had earmarked Rp 414 trillion for construction and infrastructure in the 2021 state budget, with more than a third administered by the public works ministry. The House of Representatives has approved the ministry’s 2021 budget of Rp 149.8 trillion in September.

SIMPAN contains data and information on the experience and the performance of business entities and professionals in the construction sector. The data is integrated with institutions like the Home Ministry’s Population and Civil Registration directorate general (Dukcapil) and the Taxation Directorate General of the Finance Ministry.

“With the new system, the bidding process will become more efficient because the procurement committee will not have to re-verify companies for each project. Once a company is listed on the database, it means it is verified,” Basuki said.

Deputy chairman of the Indonesian Chamber of Commerce and Industry (Kadin) human resources committee on infrastructure Dandung Sri Harninto said the organization welcomed the ministry’s initiative to expedite the bidding process as it would help support construction companies and workers.

“The refocusing of this year’s public works budget has affected our business and we have suffered a significant decline. However, as the ministry is preparing an early bidding process for 1,900 packages and is receiving a larger state budget, we believe we could see a rebound by next year,” he said.