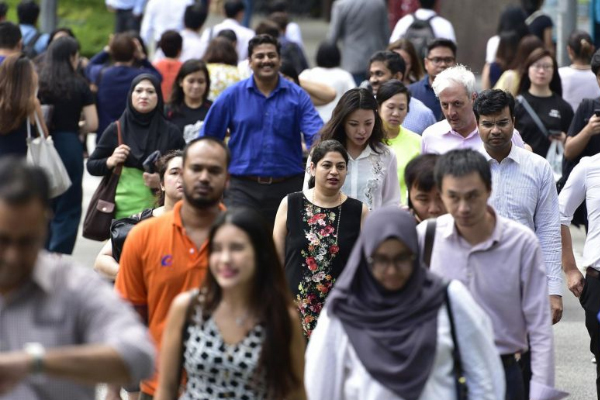 SINGAPORE - The resident employment rate was slightly higher in June this year compared to the same month last year despite economic headwinds, according to an advance labour force report on Thursday (Nov 28).

Additionally, workers` income continued to grow over 2019 but at a slower pace than a year ago, said the report from the Ministry of Manpower (MOM).

The top four sectors that hired workers were from community, social and personal services, professional services, information and communications, and financial and insurance services.

The MOM noted that the employment rate for residents aged 65 and over also rose, from 26.8 per cent in June last year to 27.6 per cent this year.

The MOM attributed this rise to cyclical effects from the United States-China trade war which affected manufacturing and retail trade.

It added that employers might be hiring more cautiously amid uncertainty, with the proportion of residents on fixed-term contracts rising slightly from 7.2 per cent last year to 7.6 per cent this June.

The real median income of full-time employed residents, which includes employers` Central Provident Fund contributions, grew by 2.2 per cent this year, according to preliminary data. This is lower than the 4.4 per cent last year.

However, wage growth in the last five years from 2014 is higher than that in the preceding five years before 2014.

Efforts to boost low-wage workers also helped, with income at the 20th percentile also rising more since 2014 than in the preceding five years before that.

The ministry said in a statement: "MOM and Workforce Singapore are closely monitoring the labour market and stand ready to step up employment support for Singaporeans through the Adapt and Grow initiative.

The Adapt and Grow initiative refers to a range of programmes including skills training, career matching and grants, to help workers adjust to changing job demands and grow their skills.

Said MOM: "We encourage employers to work with tripartite partners to train workers with skill gaps.

"We also encourage job seekers to be open to opportunities in other sectors... beyond what they are familiar with."