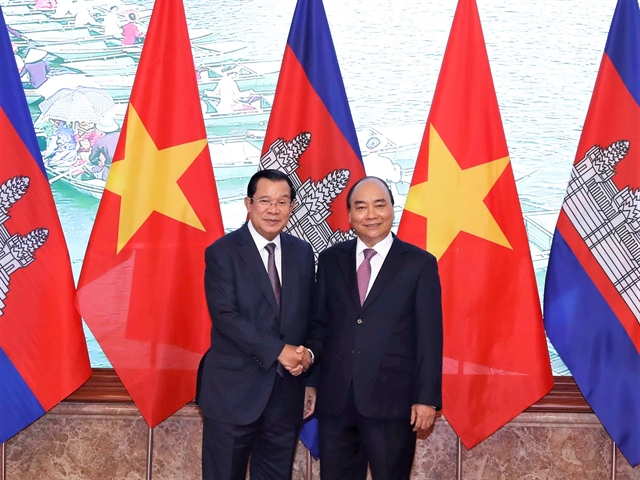 Viet Nam and Cambodia have issued a joint statement on the occasion of the Viet Nam visit by Cambodian Prime Minister Samdech Akka Moha Sena Padei Techo Hun Sen from October 4-5 at the invitation of his Vietnamese counterpart Nguyen Xuan Phuc.

Following is the full text of the joint statement:

4. The two sides attached special importance to the signing of the two legal documents acknowledging the progress in land border demarcation and marker planting achieved so far (about 84 per cent), reiterating that this marks a historical milestone in the process of land border settlement between the two countries. They also agreed to complete the demarcation and marker planting for the remaining border segments in the near future.

5. The two sides reaffirmed their commitment to the full observation of the border delimitation treaties and relevant border agreements signed between the two countries. They also agreed to enhance cooperation on border management based on existing legal frameworks and mechanism to build a borderline of peace, stability, friendship, cooperation and sustainable development.

6. In the atmosphere of friendship, mutual understanding and trust, both side`s Leaders held discussions in great depth and reached important common stances on the Viet Nam-Cambodia bilateral relations and the coordination between the two countries at regional and international fora.

7. The two sides noted with satisfaction the remarkable social and economic achievements that Viet Nam and Cambodia have recorded in recent years. Both countries have maintained their political stability and security, accelerated their economic growth and improved their people`s living standards, thus continuously strengthening their role and standing in the region and the world over. In this spirit, both sides agreed to maintain mutual support and assistance, and continue exchanging best practices for macro-economic management and international integration in a new global context.

8. Both sides noted with satisfaction that the longstanding traditional friendship and solidarity between Viet Nam and Cambodia, built on the dedicated effort of generations of their respective leaders and peoples throughout history, have become a precious common asset. They reaffirmed their determination to jointly and perseveringly preserve, cultivate and nurture the bond between Viet Nam and Cambodia, and raise it to new heights, grounded in political trust, equality, mutual benefit, mutual respect and support under the motto of "good neighbourliness, traditional friendship, comprehensive cooperation, long-lasting stability."

10. The two sides expressed satisfaction with the close and effective traditional relations between the two defence ministries, and between the Ministry of Public Security of Viet Nam and the Ministry of Interior of Cambodia. Both sides reaffirmed their commitment to close cooperation to maintain common peace and security, especially along the two countries` borderline, and to pursue the principle of not allowing any forces to use one country`s territory to conduct acts against the other`s security and stability. The two leaders agreed to make further effort to search, excavate and repatriate the remains of Vietnamese volunteer soldiers who fell in the war in Cambodia, and to work closely to speed up the repairing and maintenance of Viet Nam-Cambodia Friendship Monuments in Cambodia.

11. Recognising great opportunities for economic cooperation, bilateral trade and investment of neighbours, both sides agreed to harness all potentials to bring economics to the forefront as a pillar of Viet Nam-Cambodia`s bilateral relations. The two sides agreed to foster connectivity between the two economies through the early finalization of the Master Plan on the Viet Nam-Cambodia Economic Connectivity until 2030, and the implementation of the signed agreements on transportation connectivity, including the MOU on Cooperation Strategy in Transport Sector for the Period 2018-2025 with a Vision until 2030.

12. The two sides applauded the recent remarkable growth of two-way trade volume, which increased by 24 per cent in 2018 to over $4.7 billion and is expected to exceed US$5 billion in 2019. The two sides agreed to maintain this momentum of growth in the coming years through enhancing trade promotion measures, and supporting their respective enterprises to attend trade and investment promotion events, fairs and expos in either country.

13. The Cambodian side expressed the appreciation to Viet Nam as one of the top five foreign investors in Cambodia, with 214 projects worth over $3.3 billion in total. The Cambodian side pledged to step up the implementation of investment promotion measures and create a favourable environment for foreign businesses, including those from Viet Nam, to maintain efficient operation and expand their investment in Cambodia.

14. The Cambodian side expressed the gratitude and appreciation for the assistance of the Vietnamese side in providing training, capacity building and grant aid over the years. The two sides agreed to the timely implementation of the assistance projects, and continue to explore ways and means to improve the effectiveness of Viet Nam`s assistance to Cambodia.

15. The two sides agreed to step up cooperation in areas of great potential such as information and communication technology, tourism, aviation, banking and finance, high-tech agriculture, farming and processing of agro-forestry-fishery products and healthcare, among others. They urged the relevant ministries and agencies of both sides to utilise the existing bilateral mechanism, especially the Joint Commission on Economic, Cultural, Scientific and Technological Cooperation and the Conference on Cooperation and Development of Border Provinces to strengthen this cooperation.

16. The Vietnamese side expressed its appreciation to the Kingdom of Cambodia for the continued support and non-discriminatory treatment given to the people of Vietnamese origin living in Cambodia.

17. The two countries agreed to strengthen coordination, information exchange, and mutual support at regional and international fora, especially within ASEAN and its related mechanisms, the UN, WTO and ASEM. Emphasising the importance of ASEAN solidarity, unity, and centrality, both sides agreed to exert their efforts, along with other member states, to successfully build a rule-based, united, cohesive and people-centred ASEAN Community. In this spirit, the two sides pledged to coordinate closely with each other for Viet Nam`s ASEAN 2020 Chairmanship and Cambodia`s hosting ASEM 13th Summit 2020.

18. The two sides agreed to strengthen cooperation in the effective and sustainable management, development and use of the Mekong water resources in line with the 1995 Agreement on the Cooperation for the Sustainable Development of the Mekong River Basin, the 2018 Siem Reap Declaration of the 3rd Mekong River Commission Summit, and the 2018 Joint Declaration of the Greater Mekong Sub-region Summit, and other existing sub-regional mechanisms.

19. The two sides agreed to coordinate under the framework of Cambodia-Laos-Viet Nam (CLV) Development Triangle Area and relevant Mekong Sub-region cooperation mechanisms, to advance the effective implementation of the Action Plan for CLV Economic Connectivity up to 2030, approved at the CLV Summit in March 2018.

20. Both sides agreed to work with relevant countries to promptly finalize negotiations for a comprehensive Regional Comprehensive Economic Partnership (RCEP) that would harmonise the interests and fully account for the differences in development level among members.

21. Both sides reiterated ASEAN`s positions on the South China Sea in recent joint statements, especially the Joint Communique of the 52nd ASEAN Ministerial Meeting (AMM52). Both sides expressed the view that the current tension must soon be resolved peacefully in accordance with international law, including the 1982 United Nations Convention on the Law of the Sea (UNCLOS).

22. The leaders expressed their pleasure at the positive and significant results achieved during the Visit. Samdech Techo Prime Minister Hun Sen expressed his sincere gratitude for the warm hospitality that the leaders and people of Viet Nam extended to the delegation, and cordially invited Prime Minister Nguyen Xuan Phuc and Vietnamese leaders to visit Cambodia at suitable times. The Vietnamese leaders have accepted the kind invitations with gratitude and the concrete dates of the future visits shall be agreed upon through diplomatic channels. - VNS