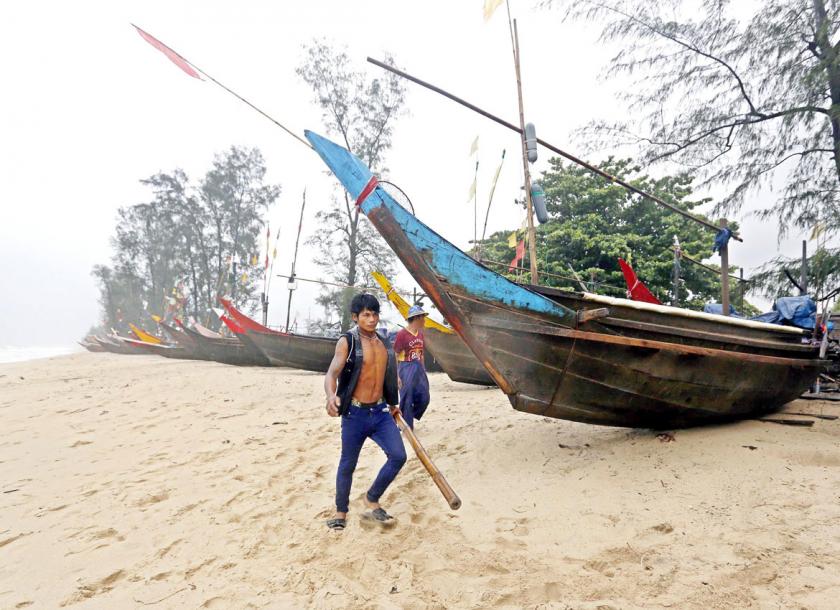 A man holds a bamboo as he walks pass near the fishing boats at the MaungMaKan village in Dawei city. Photo - EPA

Basic infrastructure such as roads connecting the SEZ to Thailand and necessities like electricity will be prioritised and carried out simultaneously with as little delay in between as possible, said U Tun Naing, Deputy Minister for Ministry of Electricity and Energy and chair of the Dawei Special Economic Zone Management Committee.

Myanmar will accept a loan from Thailand at reduced interest rates to build the two-lane Dawei-Htee Khee road, which is expected to link the SEZ to Thailand and boost trade and tourism between the two countries. Construction on the 138-kilometre road, which is being carried out by Italian-Thai Development Company Ltd (ITD), began in 2018, after the Ministry of Natural Resources and Environmental Conservation approved the environmental and social impact assessment.

In July this year, the World Wildlife Fund warned that Myanmar`s rainforests and at least nine globally-threatened species in Tanintharyi would face significant risks if the Dawei-Htee Khee road project continues without a comprehensive biodiversity protection plan.

Myanmar will also receive loans from the Asia Development Bank to set up the necessary infrastructure enabling access to the national grid. "Dawei SEZ will be able to enjoy electricity after we have extended the grid from Mawlamyine to Ye and Dawei," U Tun Naing said. Tanintharyi is the only region in Myanmar which doesn`t have access to electricity.

Development of the Dawei deep sea port project will continue according to a contract between ITD and the Myanmar government. "There are two phases for Dawei SEZ. Projects within the first 27 sq km are included in the initial phase and will be carried out according to the original contract," U Tun Naing said.

The total designated area for the SEZ is 196 sq km and projects in the remaining 169 sq km come under the full phase of development. "To develop the full phase project, we will invite locals, Thais and investors from other countries," he said.

The full phase of Dawei SEZ will be implemented soon after the completion of the initial phase, officials said. The possibility of holding Joint High Level Committee (JHC) meetings between the two governments in the near future was also discussed.

The Dawei SEZ project has been in the works since the previous government`s administration but delayed due to the lack of suitable infrastructure as well as social and environmental issues relating to the location of the SEZ.

The Dawei SEZ and deep sea port were first announced in 2008 but failed to start when ITD ran short of funds, leading to arrangements to develop the SEZ in two phases. Besides the port, other projects to be developed by ITD in the initial phase include an industrial estate and supporting infrastructure such as a power plant and liquefied natural gas terminal.

When complete, the SEZ is expected to link the southern part of the Greater Mekong region, which includes Bangkok, Phnom Penh and Hanoi. It will also link Myanmar to India, Africa and Europe.

The Dawei SEZ is one of three SEZ projects in Myanmar. Dawei is the capital city of Tanintharyi, which is in the southern part of the country, near the Myanmar-Thai border. - Translated