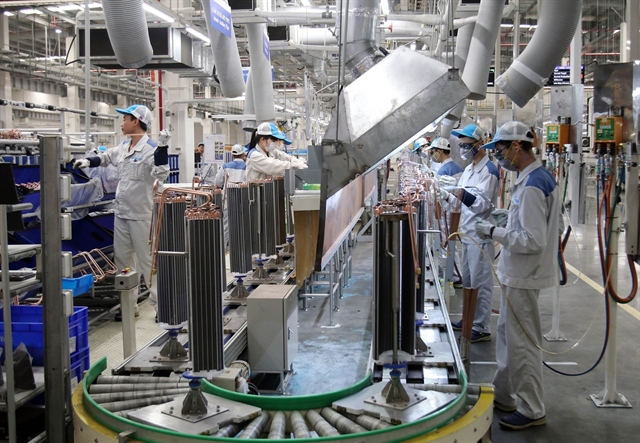 Director General of the General Statistics Office (GSO) Nguyen Bich Lam told a press conference on Saturday that amid declining global economic growth, Viet Nam still witnessed growth of 6.98 per cent in the first nine months of the year.

The processing and manufacturing sector remained the pillar of growth, with a rate of 11.37 per cent, followed by the service industry which included wholesale and retail sales, financial activities, banking and insurance, transportation and warehouses.

Agriculture, forestry and fishery increased by 2.02 per cent, lower than the growth in the same period last year, because they faced formidable challenges as the prolonged heatwave decreased productivity while African swine fever outbreaks had threatened the livestock sector`s health. However, on Saturday, Lam announced those factors were declining.

Lam also announced that in the first nine months this year, there was a record of newly-established enterprises, reaching nearly 102,300. They also had the highest level of capital in recent years, reaching an average of VNđ12.6 billion (US$543,217) each.

The FDI sector reached VNđ327.1 trillion ($14.1 billion) accounting for 23.7 per cent at a growth rate of 8.4 per cent. It is noteworthy that investment capital from the State budget has not improved much, continuing to reach the lowest growth rate in the years 2015-19.

Lam said that the total import and export turnover was estimated at $382.72 billion, of which exports reached $194.3 billion, up 8.2 per cent over the same period last year. Trade balance of goods in 9 months was estimated at $5.9 billion, said Lam.

GSO disclosed the consumer price index (CPI) in the period grew at the slowest pace over the past three years at 2.5 per cent. - VNS