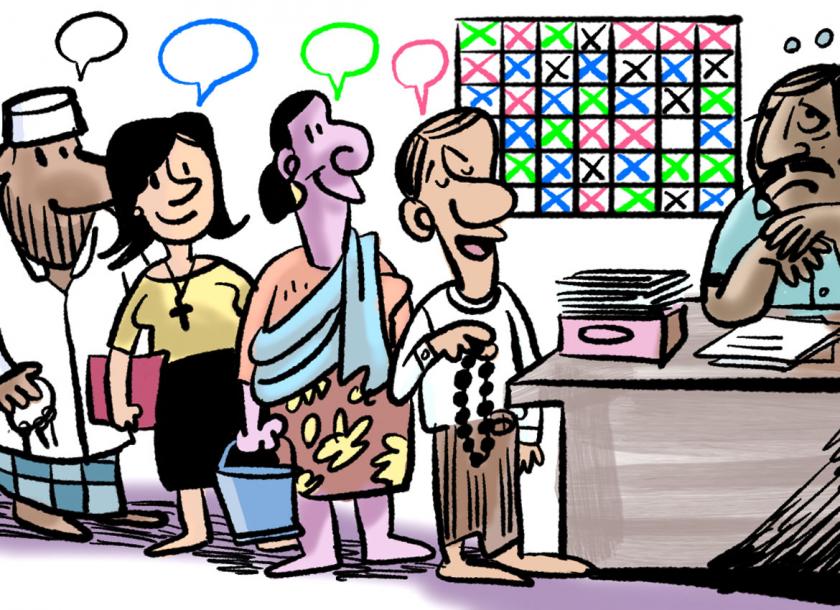 Be aware that there may be diverse religious and ethnic groups in the workplace. Allow them to respect their holy days. These include official Gazetted Holidays, for major Buddhist holidays, Christmas, Bakari Eid, and Deepawali days when staff should be granted leave. Cartoon: Awpikyeh, reproduced with permission of MCRB.

Foreign executives and managers in Myanmar can now rely on a handbook about respecting the local culture in the workplace when it comes to defusing possible cross-cultural misunderstandings and potential disputes.

The Directorate of Investment and Company Administration (DICA) and the Myanmar Centre for Responsible Business (MCRB) collaborated on the guide titled "Respecting Myanmar Culture in the Workplace".

From day-to-day issues like dress-code and eating habits to etiquette and customs in Myanmar`s ceremonies, the guide was accompanied with simple and straightforward illustrations by prominent Myanmar cartoonist Aw Pi Kyeh.

"Responsible investment is respectful investment," said U Thaung Tun, Union Minister for the Ministry of Investment and Foreign Economic Relations in a press statement.

"Respect for diverse cultures and traditions will undoubtedly contribute to the wider goals of our government, including sustainable peace."

With inputs from a wide range of stakeholders, including government, the private sector, NGOs, communities, and employees with experience of foreign workers, the guide also emphasises the importance of understanding towards diverse ethnic culture in remote areas.

With the increasing presence of foreigners in Myanmar, disputes over cultural differences have only grown in the past few years, and they are not limited to misunderstandings in the workplace.

In 2016, a Mandalay court sentenced a Dutch tourist to imprisonment for disrupting the Buddhist recital ceremony. Current labour laws in Myanmar do not address cultural differences and problems potentially may arise from them, such as discrimination and cultural conflicts.

In the International Labour Organisation (ILO) guide to the Myanmar Labour Law, elimination of discrimination at the workplace was highlighted as one of its four fundamental principles, together with freedom of association and the effective recognition of the right to collective bargaining, elimination of forced or compulsory labour, and the abolition of child labour. Of which, only workplace discrimination has not been addressed in the country`s labour law.

MCRB published a briefing paper on workplace and recruitment discrimination in 2017. The study highlights how companies need to be alert to discrimination in their hiring practices and provides practical recommendations to firms to combat these challenges, including women and ethnic minorities.