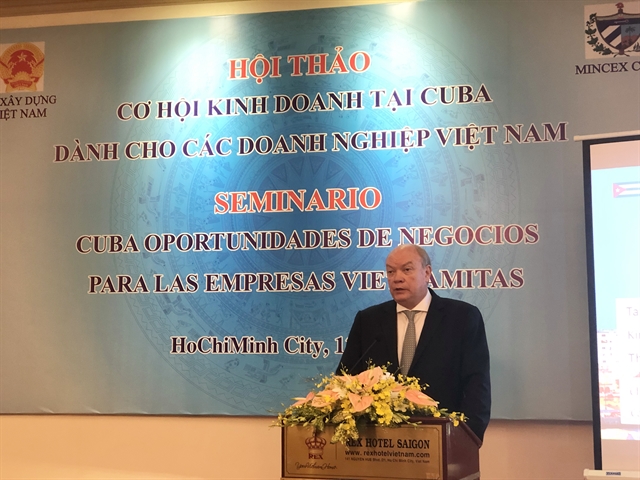 Minister of Foreign Trade and Foreign Investment Rodrigo Malmierca Diaz speaks at the seminar on business co-operation opportunities between the two countries heard in HCM City on September 13. - VNS Photo

Trade and investment ties between Viet Nam and Cuba are not commensurate with their potential and there is a lot of room for them to grow, a seminar on business co-operation opportunities between the two countries heard in HCM City yesterday.

Viet Nam is Cuba`s second largest trading partner in the Asia-Pacific, and their trade is diverse, according to Hung.

"Some Vietnamese projects have begun operation in Cuba and supplied products to the market such as Thai Binh Investment and Trade JSC`s diaper production project in the Mariel Special Development Zone, and a SANVIG joint venture company that produces construction materials in San Jose and Santa Cruz."

The two countries have increased co-operation in the pharmaceutical and medical sectors, in which Cuba is strong.

Cuban Minister of Foreign Trade and Foreign Investment Rodrigo Malmierca Diaz said bilateral trade had increased significantly in recent years but was still not commensurate with the relationship and potential.

Cuba faced difficulties including shortage of financial resources and ability to pay in foreign currencies, and so his government was working to improve the efficiency of the use of existing resources, promote exports and attract more foreign investment, he said.

Cuba is establishing industrial and service development zones, and is reforming its pricing policy, eliminating subsidies and recognising the role of the market, according to the Cuban minister. It is also improving payment systems and promoting co-operation in the tech sector.

The country`s new constitution safeguards the rights of foreign investors.

Officials from the Cuban Ministry of Health and Mariel Special Development Zone also spoke about the potential for further co-operation in the pharmaceutical and medical sectors between the two countries and investment opportunities for Vietnamese in the zone.

Anna Terresa, general director of the zone, said the huge geographical distance between Viet Nam and Cuba was no longer a big problem that hindered their trade and investment ties.

With their strength in consumer and household goods, Vietnamese firms could invest in producing them to exploit the Cuban and many other South American countries, she said.

Through Viet Nam, Cuba also would have the opportunity to expand co-operation with Asian countries, she added. - VNS