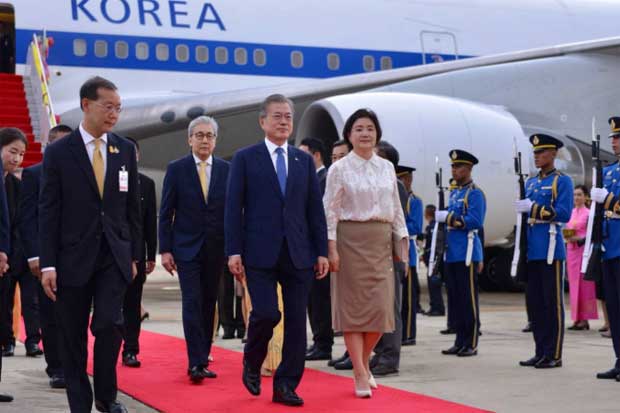 Deputy Prime Minister Somkid Jatusripitak welcomes South Korean President Moon Jae-in and his spouse upon their arrival for the official visit to Thailand on Sunday. (Photo from @MFAThai Twitter account)

The signing is to be witnessed by Moon Jae-in, president of South Korea, who is leading an economic team and companies to visit Thailand, and Prime Minister Prayut Chan-o-cha.

The first MoU will be signed by Thailand`s Digital Economy and Society Ministry and South Korea`s Land Infrastructure and Transport Ministry. The two countries aim to exchange technology on human resource development and promote related industries in smart cities.

Thailand and South Korea also plan to establish a committee on smart city development, which will be set up by Thailand`s Digital Economy Promotion Agency and South Korea`s Overseas Urban Cooperation Division.

The second MoU is between Thailand`s Industry Ministry and South Korea`s Trade, Industry and Energy Ministry on cooperation in targeted industries, including robotics and automation, bioeconomy, smart electronics, electrical appliances, and smart cars. The cooperation will also cover investment, human resource development and enhancing competitiveness for small and medium-sized enterprises in Thailand.

The third MoU, on education, will be signed by the education ministries of the two countries. The cooperation will include opening Korean language schools in Thailand, training programmes for Thai teachers and Korean studies development in Thailand.

The fourth MoU, on water development and management, will be signed by Thailand`s Office of National Water Resources and South Korea`s Environment Ministry. The cooperation will cover the implementation of smart technology on water management, better water management for consumption, industry and agriculture, water quality and ecology, and research on technology development.

The sixth MoU, on military cooperation, will be signed by the foreign ministries of the two countries.

Deputy Prime Minister Somkid Jatusripitak said Mr Moon`s visit to Thailand represents a new era of economic cooperation between Thailand and South Korea, with the latter interested in Thailand as an investment destination.

He said the government is devising an investment policy to attract South Korean investors.

Mr Somkid said he already ordered the Board of Investment and related agencies to consider the possibility of developing Korean industrial estates.

Thailand and South Korea are also scheduled to organise a Korea-Thailand Committee on Economic Cooperation by the end of this year.