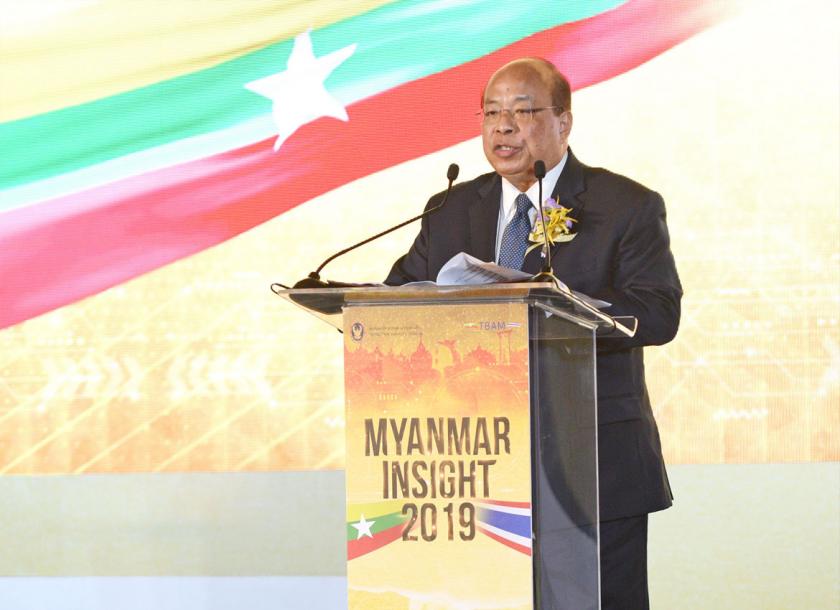 Myanmar is participating in regional connectivity initiatives in efforts to improve bilateral ties with its neighbours and promote investment and trade.

Myanmar has implemented a number of significant reforms in the economic, political and social spheres aimed at creating new opportunities for investors, which includes those from Thailand, State Counsellor Daw Aung San Suu Kyi said in a video message delivered at the Myanmar Insight 2019 forum held in Bangkok last week.

To complement the Myanmar Sustainable Development Plan, the Myanmar Investment Promotion Plan was launched to seek "dynamic, harmonious and inclusive growth while creating a more equitable and prosperous society through the promotion of responsible, quality investment".

Daw Aung San Suu Kyi noted that as Myanmar transitioned to a market-based economy, the rule of law "must serve as a foundation for an inclusive and vibrant society that safeguards the rights and interests of all our people".

She added that both Myanmar and Thailand will soon be issuing licenses to logistics companies for the transportation of goods overland through the Yangon (Thilawa) ? Myawaddy- Mae Sot ? Bangkok (Laem Chabang) route, which is expected to promote connectivity between the two countries and improve business relations and development.

Meanwhile, in his speech, Minister of Investment and Foreign Economic Relations U Thaung Tun said Myanmar continues to undergo a period of sustained growth with GDP rising to over US$71 billion in 2018 from US$8.9 billion in 2000 while GDP growth is expected to average 7 percent annually from 2019 to 2023.

"This places Myanmar amongst the fastest growing economies, in one of the fastest growing regions in the world today.Substantial investments in transportation, infrastructure, urban development and connectivity, combined with improvements to our investment climate and a raft of other recent investment liberalisation measures, are expected to sustain this progress," he said.

In addition, a new railway linking Ruili in China`s Yunnan Province to Muse on our border is due for completion, U Thaung Tun said, adding that Myanmar remains committed to regional connectivity initiatives such as the Master Plan on Asean Connectivity 2025, as it believes that these initiatives will offer a plethora of new investments opportunities, including investments which help to promote sustainable urbanisation.

He said Myanmar offered Thailand ample expansion opportunities for the regional automotive industry, in which Thailand has a leading role. He pointed out that a number of special economic zones (SEZ) like the Thilawa SEZ near Yangon has welcomed 15 Thai investors.

U Myo Khaing Oo, director of Directorate of Investment and Company Administration, said Thai investors can lease land at existing industrial zones in Yangon to set up factories. "Thai companies involved in automobile parts and food production, retailers and wholesalers from Thailand that want to move here can consider these industrial zones and avoid difficulties associated with land," he said.

He added that the industrial zones also offer international standard facilities. In addition, tenders will soon be called for the development of the Yangon Elevated Expressway Project and Yangon Urban Mass Rapid Transit Construction Project. "Thai investors can compete for these tenders if they are interested as well," he said.

Bilateral trade between Thailand and Myanmar reached US$11 billion in fiscal 2017/2018, with Thailand being the country`s third-largest trading partner and fourth-largest investor.

Thailand`s investments in Myanmar have reached US$6.6 billion in fiscal 2018-19 with half of the investments in the oil and gas industry. Another fifth of investments were in manufacturing, energy, hotel and tourism, and, livestock industries, said U Aung Naing Oo, permanent secretary of the Ministry of Investment and Foreign Economic Relations. - Translated