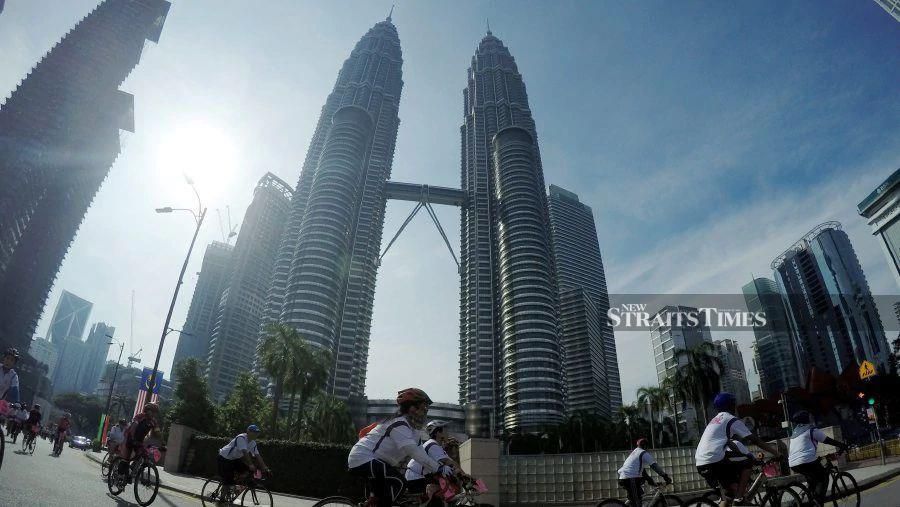 Maybank Kim Eng Group economist Lee Ju Ye said among the mega projects are the East Coast Rail Link (ECRL) which has been revived and the Klang Valley MRT 2 as well the LRT 3 project that would become the factors underpinning growth over the long term.

Malaysia`s economic growth for the second half of this year is set to be healthy and driven by the ongoing mega projects, despite the current global economic uncertainties, says Maybank Kim Eng Group economist, Lee Ju Ye.

She said among the mega projects are the East Coast Rail Link (ECRL) which has been revived and the Klang Valley MRT 2 as well the LRT 3 project that would become the factors underpinning growth over the long term.

"There are of course downside risks going into the second half and I think Malaysia will not be spared the China-US trade tensions. Export is still negative and consumer sentiment has been coming down a bit as well as the business sentiment.

"So, I think we`re quite cautious over the second half, because there is so much downside risks.But, having said that, Malaysia in the longer term, will benefit from all the investments and trade diversion coming from China-US trade conflict," she told reporters on the sidelines of the Maybank Investment Bank Market Outlook, Second Half 2019 here, today.

She said the interest shown by international firms in relocating their operations to Malaysia would result in positive export numbers for the country going forward, contributed by manufactured products.

Lee said, therefore, the scenario is that Malaysia has outperformed most of the other ASEAN countries which recorded a slowdown in the second quarter 2019 (2Q19).

She also said Malaysia was the only country in the region to not have slashed the growth forecast which resulted into a better number in the 2Q19.

"Malaysia`s second quarter gross domestic product (GDP) was a surprise on the upside at 4.9 per cent, higher than consensus estimates at 4.7 per cent and I think this is positive news for the country.

"Among the areas driving growth is still private consumption which remains resilient and you have private investments doing better as well.I think Malaysia is seeing all the benefits coming from the China-US trade war to some extent," she added.

According to Lee, Malaysia saw its foreign direct investment (FDI) approval surging strongly at around 100 per cent in 2018 as well as in the first quarter of 2019, with more firms interested in relocating to Malaysia.

Meantime, commenting on the possibility of an expected technical recession in 2020, due to the economic uncertainties and the effect of the China-US trade war, she said the situation would not be as bad as it was in 2008 because it does not involve a global financial crisis.

"(The situation) would really depend on how things play out between China and the US over the next few months.We don`t expect to see a recession yet in 2019, but in 2020, it does look possible if the two countries continued to spar on trade as well the technology side.

"So, I think ASEAN will probably go into 2020 in a cautious mood, especially external oriented countries like Singapore and Thailand, and Malaysia to some extent," she added.

Lee said the crisis at present is more inclined towards trade-related issues when compared to the recession environment of 2008, resulting in a bigger spillover effect to the rest of the economy.

"Even for a country like Singapore, we don`t think the recession will be as deep as what we saw back in 2008, when there were three consecutive quarters of negative growth. ASEAN will also see some opportunities as investment diversion takes place," she added.

Meanwhile, Maybank Investment Bank Bhd`s chief executive officer Fad`l Mohamed said that mergers and acquisitions (M&A) activity will be a recurring theme for Malaysian corporates in the second half of the year.

He said that M&As and privatisation had moved at a fast pace with ten attempts during the first half of the year (1H2019) as the broad market weakness had unlocked values.

"Companies in the Property, Steel, Plantation and Technology sectors are among those that may see further M&A activity, as these sectors are in the midst of a down cycle.

"Valuations have come to an optimum level where corporates are actively looking to consolidate and acquire new assets and capacity. In this regard, the current down cycle in some sectors has revealed long term investment opportunities that can weather the current short term volatility," he added.

"The market remains supported by sizeable holdings of strategic and long term investors, while at the same time, policy risks are dissipating. Malaysia is also well-placed to benefit from rising manufacturing investments from overseas as a result of China`s diversion of its supply chain into ASEAN," it said.

Additionally, the research firm said the restarting of major infrastructure projects such as the ECRL may provide the impetus for an improvement in investors` sentiment going forward.

Maybank IB also reiterated a defensive core equity strategy for the 2H2019 with a year-end target of 1,680 points for the FBM KLCI, valued at 16 times twelve months forward earnings.

While periods of volatility are expected, it said there are also pockets of opportunities for investors to trade on news flow and thematics.