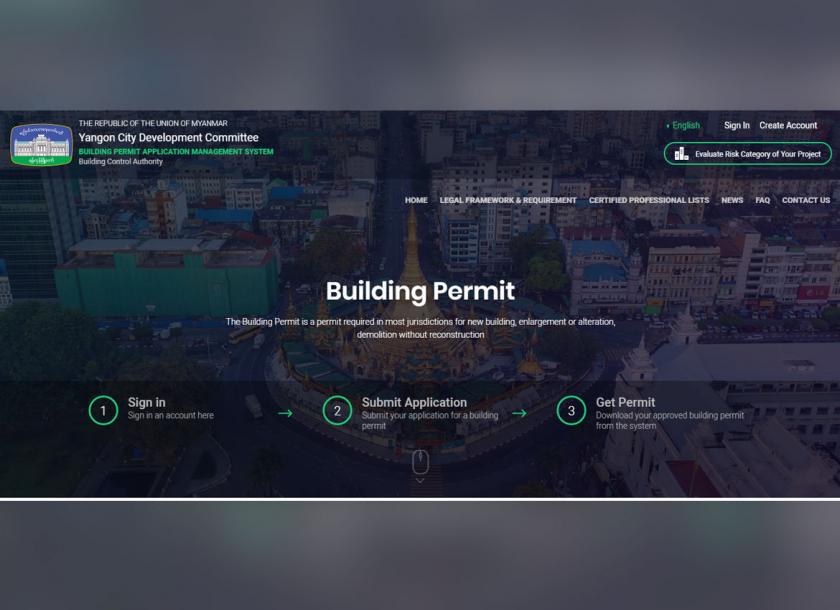 A screenshot of the Yangon Building Permit System website taken by The Myanmar Times on August 13.

Yangon City is introducing a new digitalised construction permit scheme in an effort to improve the ease of doing business.

With the support of the International Finance Corporation, the Building Control Authority of the Yangon City Development Committee (YCDC) launched the Yangon Building Permit System on July 1 and it will be piloted until the year-end.

The pilot scheme involves an automated, paper-free system which aims to reduce the processing time from an average of 95 days to 49 for about 90 percent of the 4000 construction permits submitted annually.

The new online building permit system, available in English and Myanmar languages, was custom-built for YCDC. Professionally certified architects and construction engineers are participating in the pilot testing phase.

YCDC secretary Daw Hlaing Maw Oo said the pilot scheme was developed in response to calls from the business community for more efficiency in processing permits.

"The pilot phase will test the waters, and by the time the system is rolled out in December, we will have an efficient, transparent, and cost-effective system in place," she commented.

The IFC`s support in developing the pilot system is part of its program to improve Myanmar`s ease of doing business. "Dealing with construction permits" is one of the 10 indicators used to determine the World Bank index.

Senior Myanmar officials and ministers have repeatedly pledged to lift Myanmar`s ease of doing business ranking but under the National League for Democracy-led government it has fallen from 167 in 2016 to 171 last year. It is the poorest-performing country in ASEAN.

Other related reforms include establishing Myanmar`s first credit bureau, and the approval of the revised Import and Export Negative lists which exempted about 70 percent of exported products and about 57pc of imported products from needing a licence.

Apart from the digitalisation, companies in the construction industry want the temporary import-export licences process to reduce red tape, according to EuroCham Myanmar. This includes the transparency of the import and customs clearance processes.

"There is a need for more consistency in the scheduling of issuing permits and inspections by the government to projects involving European companies. A lack of adherence to schedules has caused delays in projects and losses of large sums of money," commented executive director Marc de la Fouchardiere.