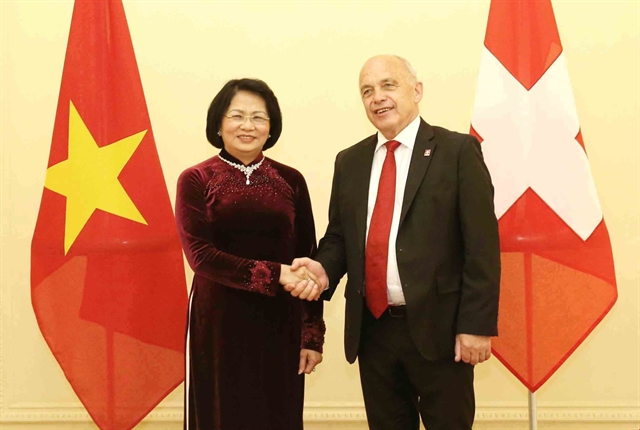 Expressing her delight over sound relations between the two nations, particularly in politics-diplomacy, trade-investment, education-training and co-operation for development, she thanked the European country for supporting Viet Nam`s successful run for a non-permanent spot on the UN Security Council (UNSC) during 2020-21.

Viet Nam wants to boost collaboration and share experience with Switzerland to fulfill its mission at the UNSC, she added.

He said Switzerland treasures relations with Viet Nam and hoped Viet Nam would continue acting as a responsible and proactive member of international organisations.

At the meeting, both sides agreed to enhance collaboration at multilateral forums, particularly the UN.

They also decided to hold more exchanges of high-ranking delegations to drive bilateral ties, including the upcoming visit to Viet Nam by head of the Swiss Federal Department of Economic Affairs, Education and Research Guy Parmelin. They also discussed the negotiations of the trade deal between Viet Nam and the European Free Trade Association (EFTA), in which Switzerland plays an important role.

They said they hoped the trade would be signed soon.

Lauding Switzerland`s contributions to global peace, security and development, Thinh hoped the country would continue its support for Viet Nam and ASEAN to settle disputes in the East Sea by peaceful means, on the basis of international regulations, including the UN Convention on the Law of the Sea in 1982 (UNCLOS 1982).

To that end, they agreed to co-ordinate to ensure the respect of international laws globally.

Vice President Thinh is in Switzerland to attend the 2019 Global Summit of Women from July 3-7. - VNS