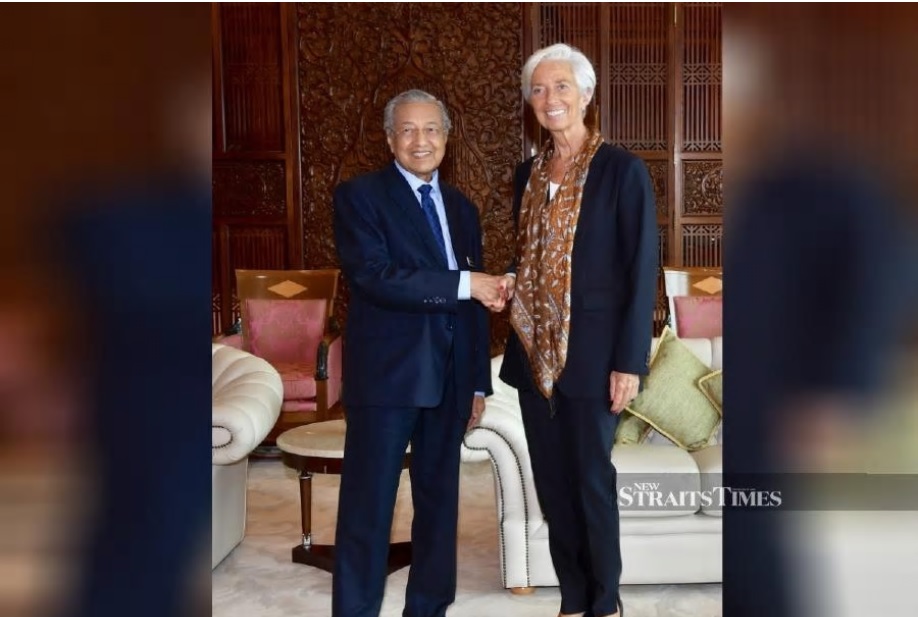 THE International Monetary Fund (IMF) is impressed with Malaysia`s economic development and resolve to strengthen fiscal discipline, as reflected in the measures being undertaken in the 2019 Budget.

She said she was pleased to see Malaysia`s 2019 Budget seeking a return to fiscal discipline.

"It is good to see Malaysia is rebuilding its buffers just in case of rainy days to come," Lagarde said after visiting the central bank.

Last year, Malaysia recorded a budget deficit equal to 3.70 per cent of the RM1.43 trillion gross domestic product (GDP). This deficit saw a sudden increment from three per cent of GDP in 2017.

Since 2010, Malaysia has been gradually narrowing its fiscal deficit from a high of 6.7 per cent of GDP.

Finance Minister Lim Guan Eng had reportedly justified that 2018`s budget deficit had risen to 3.7 per cent of GDP as the government had to recognise off-the-book projects, such as financing for the Light Rail Transit 3, schools and police premises, as development expenditure.

Lagarde acknowledged the government`s commitment to fighting corruption by being more inclusive and more specific about what needs to be improved in terms of governance.

"I`m delighted Prime Minister Tun Dr Mahathir (Mohamad) has made the fight against corruption and improvement in governance as his priorities.

"This is in pursuance of better education for all Malaysians. There is also the improvement in women`s role, which I`m pleased to see is also one of the goals that Dr Mahathir is focusing on."

Lagarde, who later met Dr Mahathir and Lim, said she would seek to "compare notes on monetary policies, anti-corruption and good governance".

She said good governance must be embedded into the legal system of Malaysia because that would be the best way to make sure it would survive the passing of time and the change of authorities over the course of time.

Lagarde met Dr Mahathir for an hour at his office at Perdana Putra in Putrajaya.

"In her opinion, this is an important matter because growth and progress will be stunted if there is widespread corruption, no matter how financial administration is implemented," he said after the meeting.

He said the meeting also discussed prospects of future collaborations between IMF and Malaysia in digital economy, among others.

"At the recent Asean Summit, the prime minister was the only head of government to talk about the digital economy from the aspect of how we collect tax revenue from the vibrant digital economy."

On the international front, the IMF chief reiterated her call for the United States and China to de-escalate their trade war, which she warned was the biggest risk to global economic growth.

"Trade war does not benefit anyone and certainly does not improve on the wellbeing of the people," said Lagarde.

Earlier this month, US president Donald Trump hiked tariffs on products imported from China after talks with Beijing broke down. This was met with retaliatory duties from China slapped on American products.

Lagarde noted that the ongoing escalating tariffs on trade between the US and China was sapping business and market confidence and could slow world economic growth by 0.5 per cent, or about US$455 billion (RM1.8 trillion), in 2020.

"There will be slower global growth if this trade tension continues," she said, having earlier predicted 3.6 per cent global economic growth for 2020.

Last week, Lim said Malaysia had registered a 73.4 per cent jump in approved foreign direct investments to RM29.3 billion in the first quarter of this year, which he attributed to beneficial diversion from the US-China trade war.

Lagarde cautioned that trade diversion to Malaysia and other countries triggered by the US-China trade war might not translate into long-term benefits.

"What is seen now as sort of a short-term fix, which seems like a great opportunity for some countries, will not necessarily develop into a longer term benefits of capital expenditure and foreign direct investment that can contribute to the real development of the economies."