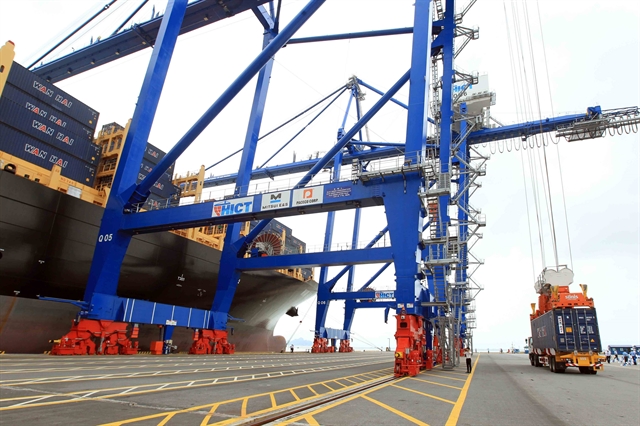 Hai Phong Port in the northern city of Hai Phong. The Vietnamese stock markets may record slow increases this week as all eyes are directed towards the US-China trade talks during the G20 summit in Japan. - VNA/VNS Photo An đang

With the outcome of the US-China trade talks in focus this week, the Vietnamese stock market may move between positive and negative sessions while investors remain guarded.

After having gained strongly in the two previous trading days, Viet Nam`s benchmark VN-Index on the Ho Chi Minh Stock Exchange showed signs of slowing growth in the final session of last week.

Despite its weaker performance on Friday, the VN-Index increased by total of 0.58 per cent last week.

But it has been in a downtrend for the last three months, losing a total of 5.2 per cent.

In mid-March, the VN-Index passed the 1,000-point level for the first time since early October 2018. Global investors have been losing patience in the three months since in part due to the growing trade tensions between the US and China.

But last week, their confidence returned after the US Fed kept interest rates stable and announced it would eye further rate cuts this year to boost the economy.

Following the positive Fed news, focus has shifted to the upcoming meeting between US president Donald Trump and his Chinese counterpart Xi Jinping during the G20 summit in Japan this week.

Both international and domestic investors hope the leaders of the world`s two largest economies will deliver positive statements to ease tensions.

Some analysts have pointed out US president Trump will not be too hawkish at the meeting as he wants to keep the economy performing well during the presidential campaign.

US stocks are expected to reach new highs if the meeting goes smoothly, but are likely to tumble if the leaders cannot find common ground.

Some experts expect the Vietnamese stock market to follow a similar path this week.

"The market is likely to move little in the short term as investors wait for the outcome of the Trump-Xi meeting at the end of June," Viet Dragon Securities (VDSC) reported on Friday.

Phan Dung Khanh, director of investment consultancy at Maybank KimEng Securities, told tinnhanhchungkhoan.vn that because the trade war has taken so long to resolve, it is no longer just an issue for the US and China. It has become a global challenge.

Cash is flowing into gold and other safe assets, Khanh said. Plus, bitcoin has overcome the $10,000 milestone while US bond yields are declining. All of those factors show buying in stocks is not a secure measure at the moment and as capital continues running away from the stock market, its prospects worsen.

According to Sai Gon-Ha Noi Securities (SHS), trading liquidity will play an essential role in moving the stock market.

Though it improved from the previous week, trading liquidity was still below the 20-week average, indicating investors were still cautious and big money had not yet returned to the market, SHS said in its weekly report.

According to vietstock.vn, more than 176 million shares were traded on the southern bourse on average in each session of the last week, worth VNđ4.24 trillion.

There would be opportunities for the VN-Index to reach higher levels this week but trading liquidity and market sentiment will be the decisive factors, the Ha Noi-based brokerage firm noted.

"The market is forecast to head toward the resistance zone of 965-966 points in the last week of June," Bao Viet Securities Co (BVSC) said.

The market may incur volatility and correction early this week before rebounding, BVSC said, adding that the resistance zone could cause the VN-Index to fall back. - VNS