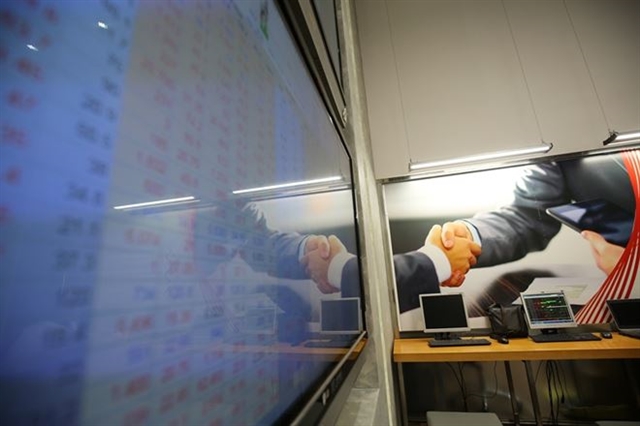 The Vietnamese stock market now has many South Korean-owned securities companies following a series of acquisitions in recent years.

Nam An Securities Company was renamed Shinhan Securities Vietnam Company after it was taken over by a South Korean company, Shinhan Investment Corporation, after acquiring 14 million shares in 2015.

Industry insiders said since the Vietnamese securities market was still in an early stage of development, foreign investors see great potential in it.

The great prospects for the country`s economy together with its stability, relentless professional improvement in the securities market and the Government`s open policy had also made Viet Nam an attractive destination to foreign investors, they said.

Its favourable geographical location and competitive labour costs were also advantages it had over other countries.

According to the Foreign Investment Promotion Department, the country has ongoing FDI projects worth $350.5 billion and South Korea accounts for $64.8 billion or 18.5 per cent.

Viet Nam`s comprehensive entry into the global market would help its securities market reach international standards, thus ensuring it is transparent and efficient and becomes a channel to mobilise long- and medium-term funds, experts said.

With a 6.15 per cent stake, the Korean company has become a significant shareholder in the VNđ32 trillion group.

A company spokesperson revealed that SK was also interested in the equitisation of State-owned enterprises and wanted to participate in the restructuring of a state-owned company, making it a parent company with a number of subsidiaries in Viet Nam.

… Not only South Korean investors

Investors from many other countries and territories are also pushing investments in Viet Nam.

Japan`s Mitsui recently agreed to buy a 35.1 stake in Minh Phu Seafood Joint Stock Company, which accounts for 20 per cent of the country`s shrimp export.

Hau Giang Pharmaceutical Joint Stock Company (DHG) is now a subsidiary of Japan`s Taisho Pharmaceutical Co Ltd after the latter increased its stake in it to 50.78 per cent in April.

The Japanese company had first bought 24.4 million shares for $100 million in 2016 before gradually increasing its stake, culminating in the purchase of 20.6 million shares in April.

DHG is the largest Vietnamese pharmaceutical firm by market capitalisation and revenue. Based on its share price of VNđ114,300 last Friday, its market value is nearly VNđ14.8 trillion ($635.2 million).

Analysts said more and more foreign investors were choosing to enter the Vietnamese market through the acquisition route instead of direct investment unlike before.

The Association of Foreign Invested Enterprises said acquisitions were worth more than FDI in the first five months of this year.

Experts said the trade diversion created by the escalating US-China trade war was one of the main reasons for both FDI and acquisitions to rise in recent times.

The CEO of HSBC Vietnam, Pham Hong Hai, said due to the trade tension, multinationals were diversifying their supply chain strategies with a mixture of local sourcing, offshoring and reshoring.

In the past decade Southeast Asia including Viet Nam has been perceived as a strong production option for multinationals given its role within existing supply chains, growing consumer base, and strong trade and investment ties. VNS