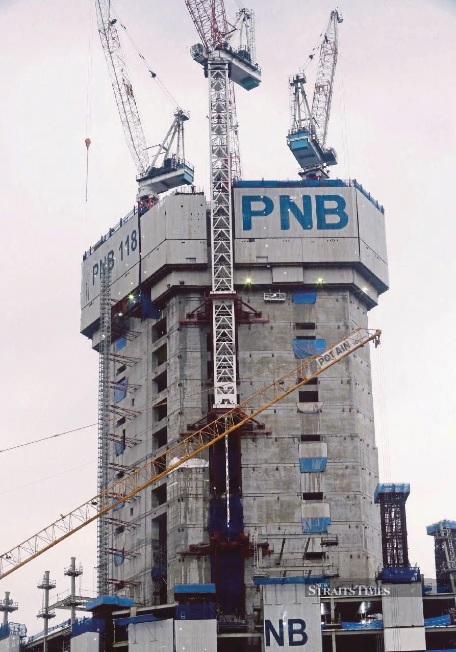 Permodalan Nasional Bhd is likely to refurbish its current headquarters in Jalan Tun Razak here once its new 118-floor skyscraper Merdeka PNB 118 is completed by early 2021.

"As of now, we have no plan yet to dispose the tower. This is an elderly building, aged over 40 years old. However, if there is a real estate investment trust (REIT) plan, we have to find new tenants to reap yields because the building is currently occupied by PNB and our subsidiaries," Abdul Rahman told media at an iftar for orphans from four charitable homes here recently.

He said the value of PNB`s building may not be as high, simply because it was an old building, which may require renovation.

"We have to study what we want to do. That is still in our plan but we have not studied it fully. We need to refurbish it," he added.

Merdeka PNB 118 is currently being built in the Kuala Lumpur city centre.

The tower is being developed on the site of the former Merdeka Park next to Merdeka Stadium and Stadium Negara in Jalan Hang Jebat.

Upon completion, it will be the tallest building in Malaysia, surpassing the Petronas Twin Towers and The Exchange 106 in Tun Razak Exchange.

It could also potentially be the fourth tallest building in the world and Southeast Asia by 2024.

The iconic tower will comprise a lifestyle retail complex, offices, residences and hotel.

The initial construction of PNB 118 was estimated at RM5 billion.

Abdul Rahman said the cost would still within the plan and expectation as PNB had spent within the allocated budget.

"We have locked in the cost - with fixed price contract - although there might be some additional material cost. It will still be stable price," he said.

He said construction of the tower was progressing smoothly, as it had now reached 61st floor.

Construction of the tower started in 2014, with UEM Group and South Korea`s Samsung C&T being the major contractors.

PNB is the owner of the Merdeka PNB 118 via its subsidiary PNB Merdeka Ventures Sdn Bhd.

Merdeka PNB 118 will also have 118 floors topped with a 150m spire. The podium floors will be occupied by retailers.

PNB and its subsidiaries will take up 42 floors while 14 floors are for amenities. Four floors will become observation decks and another 41 floors are for office rental.

The upper 17 floors of the tower will house Park Hyatt Hotel Kuala Lumpur, operated by Hyatt Hotels Corp. The five-star hotel will have 232 guest rooms, 28 suites and 30 serviced apartments.

PNB is one of the largest fund management companies in Malaysia with assets under management currently exceeding RM298 billion.