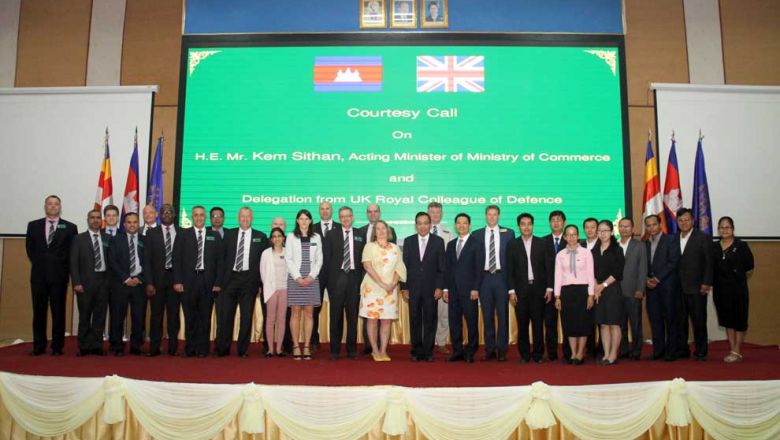 Acting Minister of Commerce Kem Sithan met with a UK delegation on Tuesday.MINISTRY OF COMMERCE

Two-way trade between Cambodia and the UK will remain strong even if the UK leaves the EU as bilateral trade between the two countries surpassed $1 billion last year, said Ministry of Commerce spokesman Seang Thay on Wednesday.

According to a Ministry of Commerce press release late on Tuesday after a meeting between a UK delegation and acting Minister of Commerce Kem Sithan, two-way trade between the Kingdom and the UK saw a huge increase last year from $500 million in 2012.

Seang Thay on Wednesday said the UK is set to be a major export market for Cambodia. While there has not been an official confirmation that the UK will continue to provide trade privileges to the Kingdom following Brexit, the ministry strongly believes that trade will see robust growth as the Cambodian government builds good political and economic relations with the UK.

"We will try to negotiate. We believe that the UK, which is a developed country, will be generous enough to grant trade privileges to us," he said. "We believe bilateral trade between Cambodia and the UK will continue to see strong growth."

Cambodia continuously has a trade surplus with the UK as export value from the Kingdom accounts for more than 70 per cent of the total trade. Textiles and bicycles represent the bulk of local products exported to the UK while UK exports to Cambodia include vehicles and medicines.

The EU is currently one of Cambodia`s largest trading partners after the US. Under the "Everything But Arms" (EBA) agreement for Least Developed Countries, Cambodian exports to the EU receive preferential treatment. In Southeast Asia, there are currently four countries with EBA status: Cambodia, Laos, Myanmar and Timor-Leste.

However, a report by the German Development Institute released earlier this year has found that the UK`s withdrawal from the EU could have negative effects on Cambodia and other Southeast Asian countries.