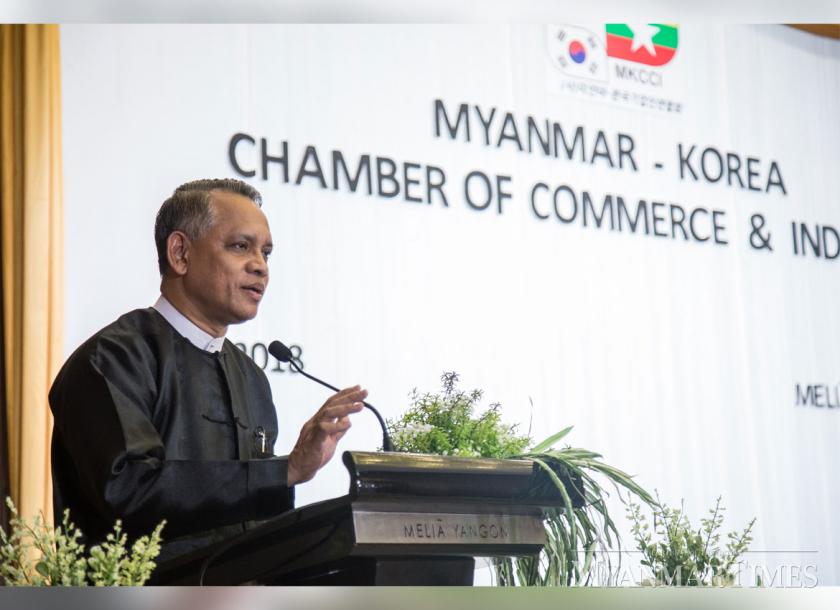 The government has appointed U Aung Naing Oo as permanent secretary of the recently-created Ministry of Investment and Foreign Economic Relations, the official gazette announced.

As the top civil servant leading the ministry, he will support and advise the cabinet minister, career diplomat U Thaung Tun, on how to drum up foreign investments and build on reform initiatives. Observers hope the new body will be the reflected voice of business in government, challenging line ministries on red tape while ensuring that related draft regulations are consulted on.

U Aung Naing Oo was transferred to be director general of the Office of the Union Investment and Foreign Economic Relations on March 29. He is to hold both positions concurrently, The Myanmar Times understands.

The civil servant is widely praised by the business community for drafting new laws and consulting stakeholders in an open and effective manner as director general of the Directorate of Investment and Company Administration (DICA).

It is under his guidance that the 2016 Investment Law and 2017 Companies Law "achieved their intended outcome," said Nishant Choudhary, co-chair of EuroCham Myanmar`s legal group.

For Mandalay Technology managing director U Zaw Naing, U Aung Naing Oo`s "excellent leadership at DICA" has made a big difference for the private sector.

"Business people in Myanmar see him as a key driver for corporate reform, including MyCo Online Register, the new electronic registry system, and the digitalisation of the investment application process. He will be able to make a bigger impact on economic reform in his new position, and brings with him a wealth of experience to support the minister," the businessman commented.

The investment ministry was established last November. Two departments formerly under the Ministry of Planning and Finance - DICA and the Foreign Economic Relations Department - were brought under the new body.

The move represents Daw Aung San Suu Kyi`s belated efforts intended to win support for her much-criticised handling of the economy. The National League for Democracy-led government is facing huge challenges from its economic governance, especially in the implementation of new policies and laws, and investor confidence is further hampered by sluggish reform and the northern Rakhine crisis.

U Thaung Tun, who`s also the Myanmar Investment Commission chair, last November pledged to establish a "single-window" system for investment proposals, based on a list of standard operating procedures agreed on by relevant ministries. This is welcome by investors but yet to materialise.

Many local businessmen, U Zaw Naing observed, are looking at how the government, including the new ministry, manages Belt and Road-related projects as well as investments from China.

He is confident that the permanent secretary will work effectively with development partners, foreign governments and multilateral institutions to "mobilise external resources in order to assist Myanmar`s transition".

"I am certain that U Aung Naing Oo would further work towards improving the business landscape and regulatory environment," Mr Choudhary added.

U Thant Zin Lwin, who has been DICA deputy director general since 2016, is set to take over as DICA chief.