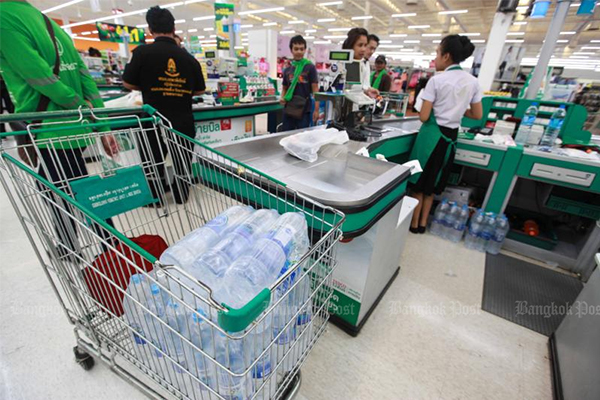 Customers wait to check out after shopping at a Tesco-Lotus store in Bangkok. (Bangkok Post file photo)

LONDON: Britain`s biggest supermarket chain Tesco said on Sunday it had started a review of its businesses in Thailand and Malaysia, including looking at a possible sale.

It said in a statement that "following inbound interest, it has commenced a review of the strategic options for its businesses in Thailand and Malaysia, including an evaluation of a possible sale of these businesses."

"The evaluation of strategic options is at an early stage, no decisions concerning the future of Tesco Thailand or Malaysia have been taken, and there can be no assurance that any transaction will be concluded. A further announcement will be made if and when appropriate," it said.

The deal could value the operations at as much as $9 billion (273 billion baht), Dow Jones reported earlier, citing people familiar with the plan. Tesco spokesman Simon Rew declined to comment on the valuation.

Tesco Thailand, branded as Tesco Lotus, launched in 1998 and has 1,967 stores. The Malaysian business started in 2002 and has 74 stores. The Thai business alone could be valued at nearly $7 billion (212 billion baht) because it includes real estate assets, Dow Jones reported. In the first half of fiscal-year 2020, the retailer’s entire Asia business produced 2.6 billion pounds (103 billion baht) of revenue, accounting for about 8% of total sales.

Under outgoing Chief Executive Officer Dave Lewis, Tesco streamlined its domestic business with thousands of job cuts and pulled back from some international markets, including costly exits from Japan, the United States and China. Ken Murphy, who will replace Lewis, was known for spearheading Walgreens Boots Alliance Inc’s push into China. Murphy will have to wrestle with a growing UK retail crisis exacerbated by Brexit, the shift to online shopping and competition from discounters Lidl and Aldi.

If Tesco does quit Thailand and Malaysia, its only overseas operations, apart from Ireland, will be its loss-making central European division, consisting of stores in the Czech Republic, Hungary, Poland and Slovakia.