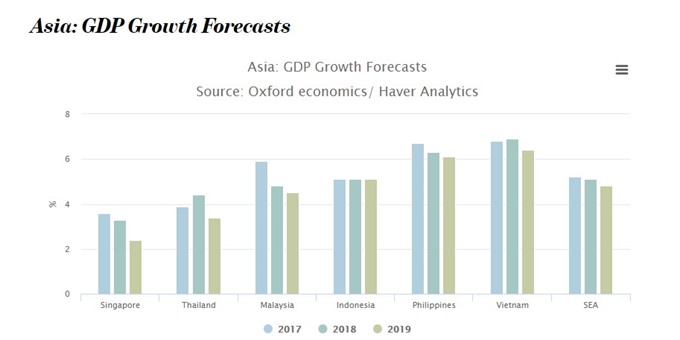 이미지 확대
While growth is set to ease in 2019, Viet Nam will still be among the top 10 fastest-growing economies globally, according to the "Economic Insight: South-East Asia" report recently released by the Institute of Chartered Accountants in England and Wales (ICAEW).

In the report, ICAEW predicts that economic growth across Southeast Asia (SEA) is expected to slow down in 2019 to 5 per cent, after an estimated 5.3 per cent in 2018.

It attributed the slowdown to US-China tensions.

"The resulting slowdown in Chinese demand will weigh significantly on SEA growth, especially for export-dependent economies with a high level of exports to China, like Singapore and Malaysia," the report said.

Viet Nam was the exception, with GDP growth accelerating 6.9 per cent on the year, up from 6.7 per cent in the second quarter as FDI inflows continued to support growth in manufacturing activity and exports.

"GDP growth across the region is set to slow next year, as many of the region`s economies are small, open and heavily dependent on exports to China, due to both supply-chain linkages as well as tightening Chinese domestic demand," the report said.

Domestic demand would likely provide some relief amid a more difficult outlook for exports. In addition, expansionary fiscal policy would also help, with fiscal spending expected to be strong in Indonesia, Thailand and the Philippines ahead of upcoming elections in the first half of 2019.

Many governments in the region, including Indonesia and Malaysia, are expected to miss their ambitious fiscal consolidation targets for 2019.

In Viet Nam, while the Government`s fiscal position has improved, there is limited space for any expansionary fiscal policy next year, the report said.

However, Mark Billington, ICAEW Regional Director for South East Asia, said that although domestic demand had held up well this year, it was unlikely to reach the stellar pace achieved in 2018, partly due to lower monetary policy support.

"Combined with a moderation in export growth, we expect GDP growth across all of the SEA economies to ease next year, as a result of the ongoing US-China trade conflict and tighter global monetary conditions," he said. - VNS