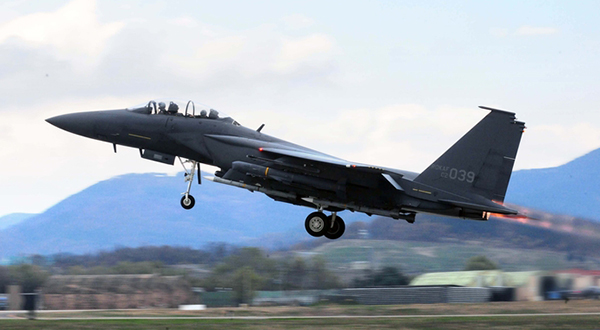 Tensions in Korean Peninsula escalated to new heights after North Korea on Wednesday fired a missile close to the territorial waters of South Korea for the first time the two Koreas had been divided seven decades ago.

South Korea responded by blasting off three air-to-surface missiles guided towards North Korea in show of capability to shoot down missile attacks from North Korea, the South’s Joint Chiefs of Staff (JCS) said upon confirming one of a barrage of missiles fired from the North fell in international waters 167 kilometers (104 miles) northwest of Ullengdo Island to set off air raid alarm and send islanders scurrying to take shelter.

According to the JCS, North Korea launched three short-range ballistic missiles from its coastal area of Wonsan into the sea. One of the three missiles landed 26 kilometers south of the Northern Limit Line (NLL) in the East Sea, a de facto maritime border between the two Koreas.

This was the first time that North Korea’s missile flew over the NLL since the armistice treaty signed in 1953 to end the Korean War that began in 1950.

“Our military can never tolerate North Korea’s provocative act and will sternly respond to it in close cooperation with the U.S.,” said the JCS.

Pyongyang’s latest provocation came after Seoul and Washington kicked off their five-day large-scale combined air drills on Monday. Hours before the missile launches, Pyongyang called for a suspension of the U.S.-South Korea joint military exercises.

Markets were mildly disturbed as they were more watchful on the results of the U.S. Federal Open Market Committee meeting.