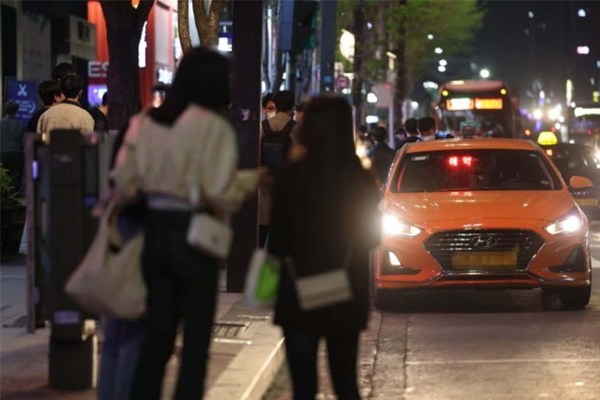 The South Korean government is reviewing an option to raise the country’s late-night taxi hailing fees to up to 5,000 won ($3.49), nearly twice the current rate, to ease the country’s taxi shortages caused by taxi drivers’ departure to food or parcel delivery services for higher earnings during the pandemic.

The government and the ruling People Power Party reached an agreement to lift regulations and adjust the nighttime taxi hailing fees to tackle late-night taxi shortages at a consultation meeting on Wednesday.

According to a report by Vice Minister for Transport Eo Myeong-so during the meeting, about 29,000 drivers or nearly 30 percent of all who had worked at taxi companies across the country quit their job and moved to the delivery and parcel service markets that pay more under the virus situation.

In the country’s capital city Seoul, 10,000 out of 30,000 drivers have abandoned taxi driving, resulting in a shortage of almost 5,000 taxis in the nighttime every day.

The most likely option is to increase the late-night taxi hailing fees by two to three times to up to 5,000 won from the current 3,000 won for taxis franchised to platform operators and by up to 4,000 won for general cabs.

Allowing part-time taxi drivers is also under consideration. Five to six hours of work will help increase operations of taxis in garages and allow more people to consider working as taxi drivers, said Sung Il-jong, top policymaker of the party.

Whether the set of measures reviewed will be successfully bringing drivers back to the taxi industry is uncertain, experts say, as they can earn 2 to 2.5 times more income with the delivery and designated driver work.

For now, the government is not considering relaxing regulations for ride-hailing and ride-sharing platforms that pulled out of the Korean market in the face of regulatory setbacks, said Sung.