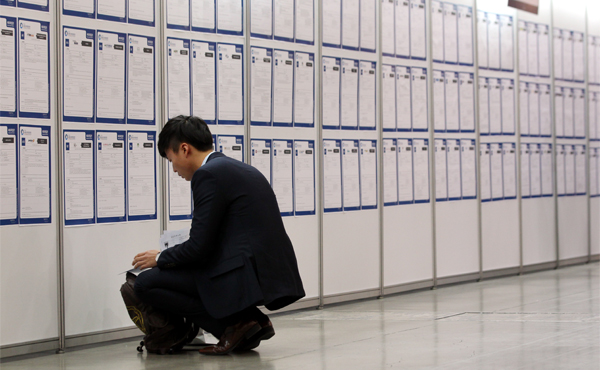 Young South Koreans are choosing to stay idle or juggle part time, or take on side hustles to survive in deteriorated employment conditions amid scarcer jobs and wages failing to keep up with galloping inflation.

According to August job data Statistics Korea, as many as 356,000 in their 20s fell under the economic inactive, unengaged in work-related training or job-seeking activities. The number of the voluntarily idle surged 54 percent from six year ago.

The so-called “not in education, employment, or training (NEET)” category shot up to 437,000 during Covid-19 peak period, but the number has not come down despite normalization of business activities.

The NEET can be different from the unemployed who has the will but cannot find a job.

The number of economically inactive 20s was tallied at 2,229,000 last month, more or less the same as six years, ago but the NEET category surged over 120,000 during the period.

Lee, a 30-year-old who graduated from a local public university, has been living with his parents since he quit a resort company that he worked at for three years.

Alongside surging NEET population, young people are looking for side gigs to survive in a strong inflation and interest rate environment. 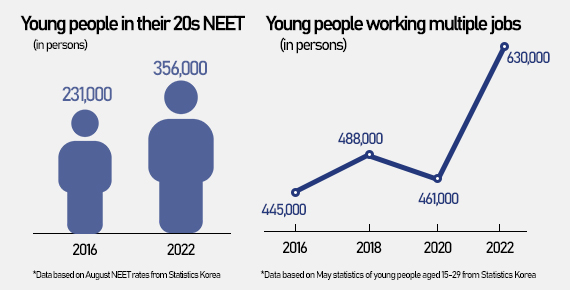 이미지 확대
Seo, a 27-year-old office worker, makes deliveries two to three hours on his bicycle because his main job is not enough to support him in the high inflationary environment.

According to a survey commissioned by Rich&Co in March, 85 percent of millennials and Gen Zs employees showed an active interest in having multiple jobs and 23 percent were already juggling more than one job. Around 20 percent were content creators on YouTube, Instagram, and blogs and around 17 percent were working as delivery drivers like Seo.

“To mitigate surging NEET rates, we need to lower the barriers to quality jobs,” said Ha Joon-kyung, an economics professor at Hanyang University. There needs to be more investment in vocational training in the labor market for youths after they graduate from universities, he added.