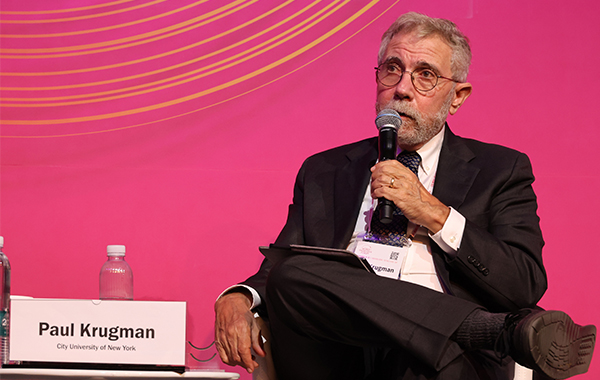 A global recession would end within one or two years, and the U.S. Federal Reserve would reverse its course on rate hikes as early as the end of this year, Nobel Prize-winning economist Paul Krugman said, citing limited impact on the global economy from the Russia-Ukraine war-caused global energy crisis.

“The U.S. economy is going to lose momentum although the latest numbers, including job growth, were strong, but I will not be at all surprised to see the Fed reverse the course late this year or early next year,” Paul Krugman said at the World Knowledge Forum held in Seoul on Tuesday.

Krugman, Distinguished Professor of Economics at the Graduate Center of the City University of New York, won the 2008 Nobel economics prize for his analysis of trade patterns and location of economic activity.

Krugman showed confidence in the global economy next year and beyond, saying “The Fed has not lost control, and the situation now looks less serious than people feared in the early days of the pandemic and the outbreak of the war in Ukraine earlier this year.” As evidences to back up his optimism, he noted that oil and commodity prices soared right after the war began, but they stabilized quickly, and disruptions caused by the war remain limited.

“The only downside is that Russia has cut off natural gas, causing a shock across Europe. But Europe will eventually adapt to the reality. A global recession could be shorter than a year or two, and I am not worried about the future in two or three years.” 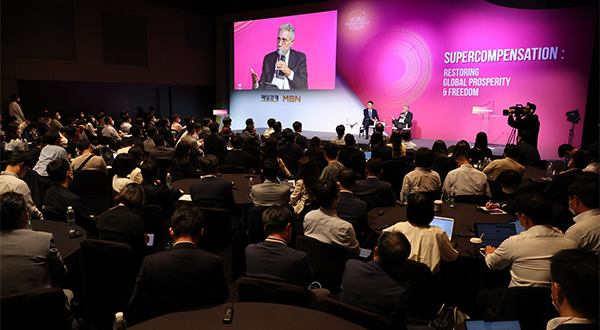 Regarding the strong U.S. dollar trend and its impact on South Korea, the economist advised that Korea does not have to meddle the FX market, but the country should use its monetary policy to contain the inflation.

Krugman also said that deglobalization manifested by the pandemic and the Ukrainian war is the cause of fundamentally changing the geopolitical landscape, making trade restrictions justifiable means to protect national security as seen in the measures taken by democratic allies, including South Korea, to effectively curtail the sales of semiconductors to Russia. Against this backdrop, the U.S. and other major countries have emphasized reshoring, nearshoring, or friend-shoring which make supply chains more agile and resilient.

The professor warned that the current situation could inevitably be detrimental to export-dependent countries like South Korea.

“The CHIPS and Science Act is quite nationalist and arguably in violation of the free trade agreement, but there may be need (for South Korea) to make some choice between being a partner with the world of democratic nations or being closely dependent on the Chinese market. You have to decide that you are part of the democratic alliance even at some cost,” Krugman advised.