Europe invites stronger alliance with South Korea from technology value chain to security and climate changes to address common challenges from pandemic to supply crisis from the protracted Russia-Ukraine war, according to Francois Hollande, former president of France.

“What we wish to see, first of all, is Korea, because it is so equipped with great technologies, we could collaborate on satellites, missiles, and cyber security,” said Hollande at “Europe, At Its Turning Point: Beyond Conundrum Toward Prosperity” session that kick-started the three-day World Knowledge Forum 2022 Tuesday hosted by Maekyung Media Group under the theme of “Supercompensation: Restoring Global Prosperity & Freedom.”

Hollande called for more direct forms of cooperation between NATO member states and Korea “for peace and security” of the peninsula. South Korea was invited for the first time to the summit of North Atlantic Treaty Organization (NATO) in July in Madrid.

The session that followed the opening ceremony of the forum was virtually joined by David Cameron, former Prime Minister of the United Kingdom as he had to attend the Queen Elizabeth II funeral, at the moderation by Kang Kyung-wha, Korea’s former foreign minister and distinguished professor emeritus at Ewha Womans University.

Cameron agreed with Hollande, stressing that “deeper partnerships with countries like Korea” and to create “greater sense of alliances” is a must. 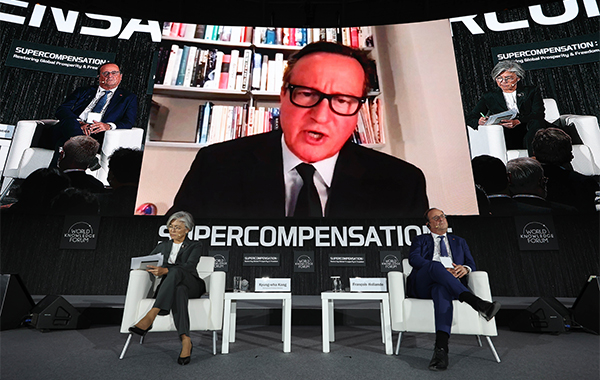 Countries all around the world should also work together to deal with climate change.

The situation in Ukraine is aggregating environment issues as more countries are turning to coal generation due to gas disruption from Russia.

Transition in energy source is necessary, and Europe can take the lead, Cameron said, noting that if all of the G20 countries contribute, the goal of getting global warming to under 1.5 degrees Celsius would be possible.

Cameron added that climate change is an issue about “resilience and security.”

When it comes to achieving supercompensation, the two former leaders emphasized “freedom.”

“We need to make sure sovereign states are guaranteed their independence and their own rights, only then we can achieve supercompensation,” Hollande said. At the same time, “countries should stop pursuing their own national interests… and open up their doors.”

Cameron also underscored the importance of “collaboration between like-minded countries” and also institutions like the United Nations. 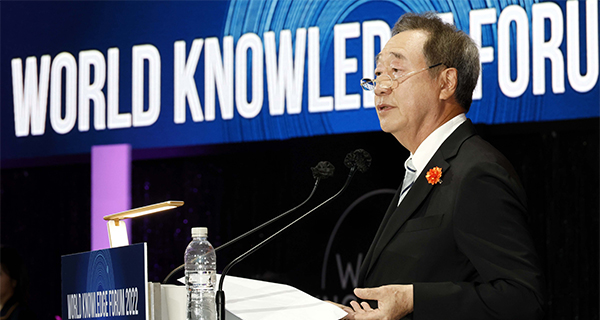 Chang Dae-whan, chairman of Maekyung Media Group in his welcome speech, also highlighted the importance of freedom in dealing with crises such as the global pandemic, war in Ukraine, significant disruptions in supply chain, inflation, and climate change.

“History proved how freedom was preserved in recurring crisis,” he said. “It is the key to achieving prosperity,” and furthermore, “supercompensation.”

Countries should re-examine how significant freedom can be as it “serves as energy for future challenges.”

“Today, the international community is experiencing many challenges and we are witnessing major threats to freedom and liberty and peace and prosperity,” Korean President Yoon Suk-yeol said in a congratulatory message read out by his senior secretary for policy and planning. “It is time for the global society to work together in order to preserve and protect our precious freedom… and turn crisis into opportunity.”

Yoon emphasized the value of freedom and global solidarity that are foundation for “growth and prosperity.”

The WKF is held at at Jangchung Arena, the Shilla Seoul, and DDP in Seoul until Sept. 22.