Asia’s biggest startup convention Try Everything to run on Sept. 21-23 in Seoul 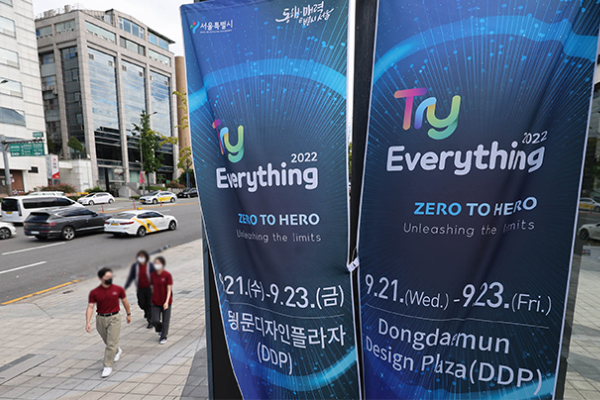 Promising startups, investors, and accelerators from around the world will come together at Dongdaemun Design Plaza (DDP) in Seoul for Asia’s biggest global startup convention ‘Try Everything 2022’ this week to seek funding tips and mentoring and next unicorn candidates.

The global startup festival, which marks its third year this year, is a venue for open innovation involving global startups and enterprises working toward a healthier startup ecosystem, and it will be jointly hosted by Seoul Metropolitan Government and South Korea’s Maekyung Media Group and organized by Seoul Startup Hub.

This year’s event will take place on Sept. 21-23, one day before the World Knowledge Forum, the largest business forum in Asia hosted by Maekyung Media Group.

This year’s convention, which is expected to be the largest ever, with 120 investors and more than 1,300 startups participating, aims to attract more than 60,000 participants and raise up to 75 billion won ($53.8 million) in investment deals for participating startups.

Try Everything consists of more than 40 competitions, lectures, and seminars for startups, and various global organizations such as South Summit, Extreme Challenge, Startup Genome, and the U.S. Embassy in Korea, as well as Korean and overseas startup ecosystem experts, will join the event to further elevate the program.

Keynote lectures to open the event on Sept. 21 will be delivered by Sebastien Borget, co-founder of The Sandbox, who made waves in the metaverse creator economy, on how to cooperate in the field of information and technology between companies, cities and countries, as well as Tyler Cowen, economics professor at George Mason University, profiled as “America`s Hottest Economist” by Bloomberg BusinessWeek, on how to revitalize the startup ecosystem based on private autonomy and public support.

Philip Rosedale, founder of Linden Lab, who developed Second Life, one of the first virtual worlds to gain popularity, in 2003, will stand on the podium on Sept. 22 to talk about a strategy to create a better user experience with more realistic avatars than before by applying cutting-edge technology. Other key speakers include Maya Rogers, President & CEO of Tetris, the world’s most famous puzzle game; Maria Benjumea, President and Founder of South Summit, Southern Europe’s largest startup fair; Jong Yoon Kim, CEO of Yanolja, Korea`s leading travel platform; Saeju Jeong, Co-Founder and CEO of Noom, one of leading healthcare solution providers in the U.S.; and Sooinn Lee, CEO of edutech company Enuma.

On Sept. 21, Michael Jeon, Managing Partner of Solasta Ventures; Fleur Pellerin, CEO of Korelya Capital; Maya Rogers, CEO of Tetris; and Marco Marinucci, Founder & CEO of Mind the Bridge, will share their insights with the audience.

Try Everything 2022 Awards, an integrated award ceremony for National Entrepreneurship Audition and Korea Challenge, the event’s startup competitions, will be held on Sept. 23. An award from Seoul Mayor and a total of 28 million won in startup support grant will be given to 10 final winners. During the National Entrepreneurship Audition session, singer and actor Siwon Choi, who is a member of K-pop group Super Junior, will participate as a keynote speaker. Choi plans to share his experiences as an investor in startups in various fields such as vehicle brokering platform, K-beauty, and food and beverages with the audience.

Rising Impact with COMEUP to be held for the first time this year to support mentoring and networking of startups is a collaboration program between Rising Impact, a gathering of startups with a good influence to address social problems, which was initiated by Maeil Business Newspaper, and COMEUP, a startup event from the Ministry of SMEs and Startups. The event to be held on Sept. 23 will feature pitching by promising startups, followed by an evaluation and advice session to be led by Korea’s leading venture capitals.

More information is available at www.tryeverything.or.kr and all programs of the event will be broadcast live on YouTube.

By Kim Tae-sung and Minu Kim